March 3 — Immigrant rights groups and other social justice organizations responded to a call from the Detention Watch Network to hold demonstrations at Immigration and Customs Enforcement (ICE) facilities across the U.S. today.

In Georgia, the Coalition to Shut Down ICE was formed that included dozens of organizations from all parts of the state. 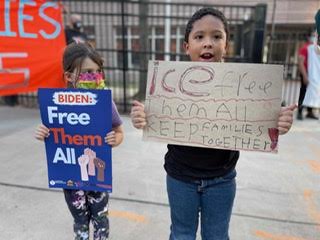 A main local focus was the news that the Folkston Detention Center, operated by the for-profit GEO Group, was going to be expanded into a 3,000-plus bed facility. The prison is located near the Florida border in Charlton County, the fourth poorest county in Georgia and 11th poorest in the U.S. The economic benefits in jobs and economic growth from Folkston that were previously promised to the town have been proved false.

GEO Group reaps an estimated $1.9 million a month at present from the 780-bed facility. The expansion would almost quadruple that amount.

Opponents of the Folkston Detention Center traveled from major cities and smaller towns and stood across the street from the multibuilding complex with signs and banners. Speakers using a powerful sound system addressed the criminal treatment of detainees and denounced a system that cages human beings for profit.

In Atlanta, a comparable crowd gathered at ICE Field Office, which is in charge of arrests and detentions in Georgia, North Carolina and South Carolina. People held up banners and signs, some targeting President Joe Biden for breaking his promise that his administration would end all contracts with private prison corporations. Another demonstration at Folkston is planned for March 19.