Last year, an elementary school in Birmingham, Alabama, forbade their students from discussing the occupation of Palestine, due to the political nature of the topic. They said it was not appropriate to mix education with politics. Last week, that same elementary school held a fundraiser for Ukrainian refugees. 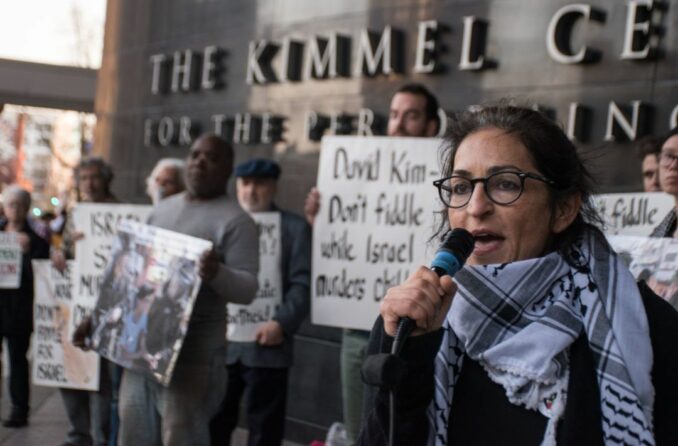 FIFA and UEFA have routinely fined football fans for flying Palestinian flags during matches against Israeli teams. They have likewise punished players who expressed solidarity with Palestinians. In 2009, at the height of Israel’s assault and rampant murder of Palestinians in Gaza, and as Palestinian footballer Mahmoud Sarsak was wasting away on a hunger strike in Israeli prisons, Seville striker Frédéric Kanouté was slapped with a fine for exposing a T-shirt reading “Palestina” under his jersey.

Colin Kaepernick was booted from the NFL for kneeling in protest for unrelenting police brutality against Black America. Repeatedly we were told it was not appropriate to mix sports with politics. But within days of Russia’s invasion of Ukraine, FIFA and UEFA announced they were banning Russia’s national and club soccer teams from all international football competitions, including the upcoming 2022 World Cup in Qatar.

Many musicians and other cultural workers who rebuffed the Palestinian call to boycott Israel told us that culture should not mix with politics. Some of those same celebrities, like Nick Cave, are now cancelling their performances in Russia. Venues around the United States and Europe are cancelling Russian ballets, orchestras and other performances. Even the International Cat Federation — who knew there was such a thing? — banned Russian cats from competing.

Palestinians, who have faced constant bombs, apartheid, murder, theft, harassment and unspeakable terrorism from the Israeli military and their paramilitary settlers, have been calling on the world for over a decade to boycott Israeli goods as a minimal act of solidarity with a besieged and occupied civilian population with no way to defend itself.

But we were told that boycotts are “unhelpful,” and we should instead “negotiate” with our colonizers for our freedom. In fact, nearly every state has since passed so-called “anti-BDS laws” meant to literally criminalize boycotts of Israel. But within days of Russia taking military action in Ukraine against increasing NATO threats on its border, stores around the world are removing Russian products from the shelves.

When the U.S. was carpet-bombing Iraq, one of the oldest civilizations in the world, the media called it “Shock and Awe.” They showed us explosions, as if fireworks. That same media has referred to the attack in Ukraine as a “Nazi-style blitzkrieg,” even though what Russia did does not compare in severity, death toll or duration to what the U.S. or Israel did in any of their imperial wars throughout the Middle East.

We always knew — even if we hoped otherwise — that the West was irredeemably racist and terminally corrupt. But whatever doubts we may have had before have been put to rest. The West hates us. They have nothing but contempt or occasional pity for our lives. They have never been our friends, nor can they ever be. I don’t know what it will take for the Global South to finally understand this.

Palestinian activist Susan Abulhawa, a member of Workers World, is a globally acclaimed novelist. Her latest novel is “Against the Loveless World,” Atria, 2020.