Cries of “Abolish NATO!” and “Resist U.S. imperialism!” echoed around Pioneer Courthouse Square in Portland, Oregon, March 6. These were the phrases that garnered the loudest cheers from the nearly 160 protesters gathered to protest NATO encroachment on Eastern Europe. A coalition of groups organized the “Stop NATO War on Russia! Stop the Sanctions!” rally. 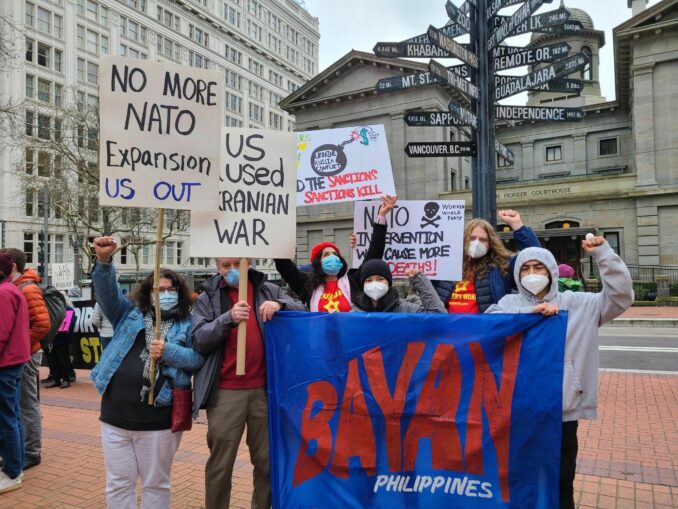 Workers World Party collaborated with the International League of Peoples’ Struggle to initiate the demonstration. Danny O’Brien, who has written for Workers World on the subject, gave much needed historical context to the ongoing conflict in Ukraine.

“The people of the Ukraine will see their country torn apart further by imperialist powers,” O’Brien explained. “Because of the sanctions levied against them, Russia’s people could potentially starve, be hit with massive hikes in poverty rates, lose access to proper medicines and fuels for heating and transport. Europe’s working class will suffer from a rise in inflation and poverty. U.S. workers will face rising gas prices, potentially lower wages, higher inflation and a cultural uptick in racism, xenophobia and blind patriotism.”

As should be expected, local news coverage of the event by KOIN TV completely ignored the anti-NATO emphasis of the rally, co-opting it into the State Department’s narrative that places the blame entirely on Russia. Luckily, their words could not hide their footage of protesters with anti-imperialist signs.