In view of the intense international crisis exacerbating the confrontation between U.S.-NATO imperialism and Russia, and in light of the upcoming NATO Summit in Madrid this June, we in Workers World publish this Statement of the Coordinating Committee of Communist Nuclei* in the Spanish State, which is a NATO member. Some of the terms and acronyms are explained at the end. Translation: John Catalinotto. 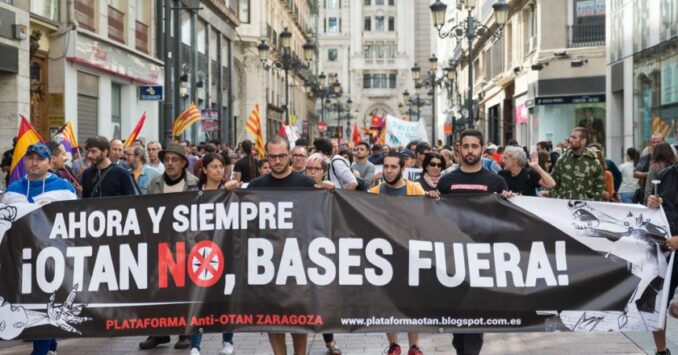 Once again we must confront confusion. Once again the media owned by the international oligarchy and the big Spanish banks and multinationals — together with the “public” media in the hands of the governments of the Spanish State and the Autonomous Communities, all aligned with NATO and preparing their Summit in Madrid at the end of June — have prepared the story for us: Russia invades Ukraine, then “no to war.”

From their well-financed seats in parliament, the PSOE, Podemos, IU and the PCE*, as government forces preparing to receive with full honors the president of the USA and the rest of the heads of state of the most criminal alliance in history, cry out against Russia for the “invasion” of Ukraine. [Podemos founder] Pablo Iglesias, the same politician who urged us to keep our red flags because they were archeological history, surpasses himself in cynicism and dares to set himself up as a communist icon to camouflage his submission to NATO.

NGOs and other organizations march in step to the same script which, every time NATO or the “international coalition” attacks different countries, have made speeches that have systematically served to whitewash the crimes of imperialism. Suffice it to recall their “Neither NATO, nor Milosevic” — in the war to destroy Yugoslavia, “Neither Bush nor Saddam” when Iraq was ravaged, “Neither NATO, nor Gadhafi” when Libya was annihilated, or the demonization of al-Assad, when Euro-American imperialism sought to add Syria to the basket of destroyed nations to be plundered.

To neutralize the capacity of the workers and popular mobilization in the face of such crimes, the great communication empires provided us with the corresponding media lies. And we must not forget them. We remember these lies: the cormorant soaked in oil because Saddam Hussein was an eco-terrorist; the babies torn from their incubators in Kuwait; Iraq’s weapons of mass destruction; Gadhafi’s trumped-up bombings of his own people; al-Assad’s attacks with chemical weapons, etc.

The working class, and anyone who aspires to have a full idea of what is happening, should never forget that “the dominant ideology is the ideology of the ruling classes” and that the owners of the media, now more than ever, are the same ones who work for them and use them so that the peoples’ — as [Spanish poet Antonio] Machado said — hand would not find [Spain’s] wound.

Therefore, in order to be able to assess the reality of what is happening, it is essential to know the historical process and to situate the events in their context.

How did NATO come into being and what has it done since then?

Not until six years later, in 1955, contrary to popular belief, the Warsaw Pact was created, a military alliance of the USSR and allied countries to counter the Atlantist threats.

In 1986 a referendum was called, plagued by threats if the NO won. The conditions for the YES vote, which won, were: not to be part of the military structure, not to stockpile nuclear weapons in the Spanish State, and to progressively reduce the U.S. military presence in our territory. As it is well known; none of the conditions were fulfilled.

Not only was Spain integrated into the military structure, but [PSOE leader] Javier Solana became its Secretary General; and bilateral treaties with the U.S. were extended and multiplied, which included not asking about nuclear weapons and the increase of military bases.

To this must be added the direct or covert participation of the U.S. and European powers in a multitude of coups d’état, instigation of civil wars, destabilization of countries, sanctions and blockades that have caused the death of millions of people, hunger and disease in Latin America, Africa and the Middle East.

What is happening in Ukraine?

The interimperialist contradictions between the U.S. and the EU

As we said at the beginning, one of the central objectives of NATO since its creation has been and is, especially after the disappearance of the USSR, to assure U.S. domination of Europe. This means preventing, by means of military control of the EU, any alliance or relationship, even commercial, of the EU with Russia. Here are two recent examples:

On the other hand, all the governments of Spain [federal and of the regions] have actively participated in the imperialist chain, showing a greater alignment with the U.S. than with other European countries.

Faced with the scenario of open war that is being prepared, what is our responsibility, and what are our immediate tasks?

After the unbearable rise in prices, especially energy prices, a very important increase in military spending is now being announced, with public money and money taken away from social spending. Germany has already embarked on this path. The German Parliament, without institutional opposition, approved on Feb. 28 the astronomical figure of €100 billion for “defense.”

All this is shaping a scenario of rapid deterioration of the living conditions of millions of people and of probable social outbursts, which the governments will try to control by intensifying repression and propaganda.

*The Coordinadora de Núcleos Comunistas is an organization recently formed by comrades from different territories of the Spanish State who have left the organization Red Roja, among them David Ubico and Ángeles Maestro, together with militants from other organizations, as well as people without previous organizational affiliation.

PSOE is Spanish Socialist Workers Party; IU is United Left; PCE is Communist Party of Spain; Podemos is the party that first arose out of the occupation of public square in 2011. The statement’s supporters consider these parties to be social-democratic collaborators with the capitalist Spanish State and subservient to NATO (the PSOE has led many federal governments since the 1978 “transition” following fascist Francisco Franco’s death in 1975, alternating with the openly rightist Popular Party.)

The statement uses the term Spanish State instead of Spain, because the central government rules over different peoples with national identity, for example, Basques, Catalans and Galicians, who have struggled for self-determination.