March 2 — Dozens of supporters of Mumia Abu-Jamal — the imprisoned, internationally renowned journalist, community activist and Pennsylvania political prisoner — gathered March 2 outside the city’s Common Pleas Court. At an earlier brief court hearing on Mumia’s current appeals of his unjust sentence, Judge Lecretia Clemons postponed the hearing at the request of the prosecutor’s office, for 120 days, until June 29. 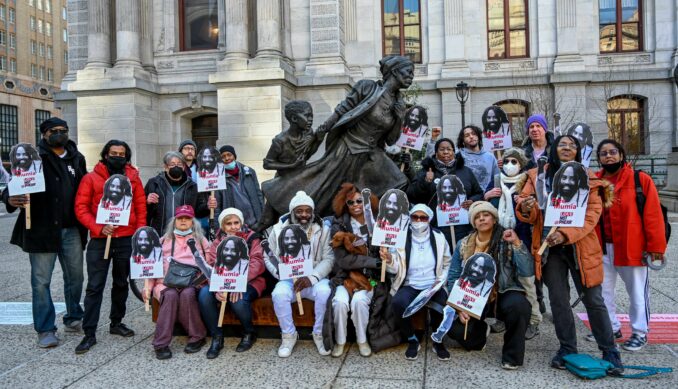 On Jan. 4, Judith Ritter and Sam Spital, attorneys for veteran Black Panther Abu-Jamal, had filed a petition for a Post-Conviction Relief Appeal, based on evidence contained in six file boxes they had not been able to review until January 2019. Abu-Jamal was prosecuted and sentenced to death in 1982.

The boxes were found in a remote storage room in the Philadelphia District Attorney’s office in late December 2018. The uncovered evidence reveals a pattern of misconduct and abuse of authority by the prosecution, including bribery of the state’s two key witnesses — a violation of the U.S. Supreme Court ruling in Brady v. Maryland — and racist exclusion in jury selection — a violation of the landmark SCOTUS ruling Batson v. Kentucky.

After the adjourned court hearing, #LoveNotPhear activists gathered at the nearby Harriet Tubman statue before dispersing back to their homes in Philadelphia and New York City.

The nine-foot-tall Tubman statue will be featured in front of City Hall’s North Apron through the end of March to celebrate the abolitionist’s 200th birthday, as well as Black History and Women’s History Months. Tubman had a strong connection to Philadelphia, making her way to the city in 1849 after escaping slavery in Maryland and speaking at the city’s Mother Bethel A.M.E. Church.

The sculpture of Tubman by Wesley Wofford is entitled “The Journey to Freedom” — emblematic of the determined 40-year struggle to free Mumia Abu-Jamal.