United Steelworkers (USW) Local 14919 has been on strike against the Sherwin Williams company since Feb. 5. The 55 union members hit the picket line in the Cleveland suburb of Bedford Heights with signs reading “Fair contract now!” The plant where they work manufactures a range of aerosolized chemical products, such as cleansers and deicers. 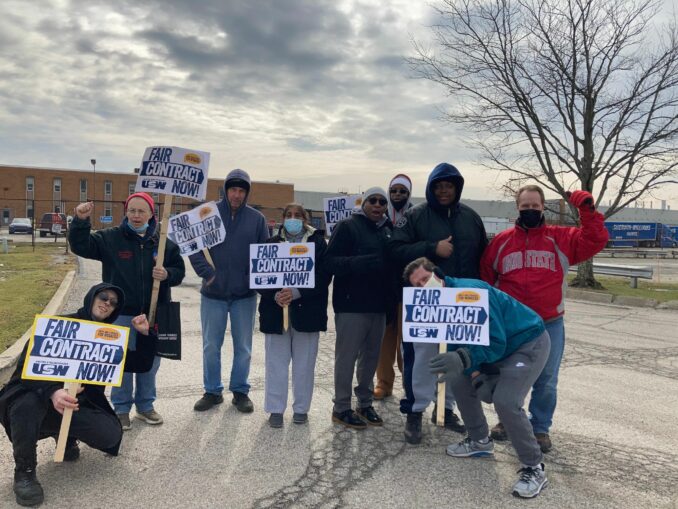 Strikers want a contract that includes a decent pay increase and paid sick time and does not contain a new proposed attendance policy that would punish workers who stay home when they are sick. Sherwin Williams is only offering a 1.5% raise — an insulting 55 cents an hour that amounts to a pay cut after inflation.

In the middle of the pandemic — along with working around hazardous chemicals — workers have no paid sick leave. Designated essential workers, they have been putting in 12-hour days.

The company, best known for paint products and its iconic slogan “Cover the Earth,” was founded in Cleveland in 1866. A new downtown Cleveland headquarters and a research center in the suburb of Brecksville will be built for the combined cost of around $600 million. In 2020 the Cleveland City Council approved $100 million in tax incentives to keep Sherwin Williams based in the city.

The workers are angry that the company says it can’t afford what they are asking for, while spending over half a billion dollars on new buildings. Most of those we met on the picket have been at the plant 10 to 20 or more years. Also picketing was a young worker with only a month in the plant.

One picketer was a recent retiree who said that in 44 years, while Sherwin Williams talks as if workers were part of its “family,” he has never felt like he was treated as equal to management. He has experienced racism as an African American worker. But a short distance from the picket, the company had a sign that read “Hiring Now! Join our Team!” — a team we jokingly referred to as the Bedford Scabs.

Supporters in Northeast Ohio are being asked to visit the picket line and bring food and coffee.