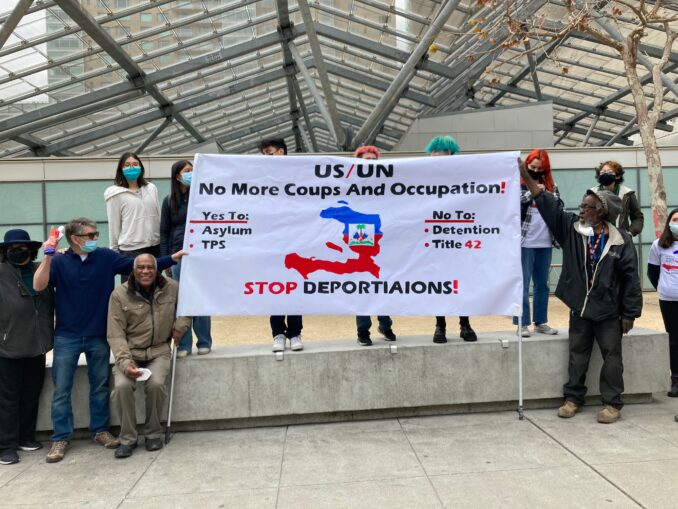 To the beat of the educated fingers of Tacuma King on congas, the Haiti Action Committee led a protest at the Federal Building in San Francisco Feb. 26, to denounce the last 18 years of neocolonial occupation of Haiti.

Armed forces from the U.S., France and Canada invaded the island and overthrew Haiti’s overwhelmingly elected popular government on Feb. 29, 2004. They kidnapped President Jean-Bertrand Aristide and flew him and First Lady Mildred Trouillot Aristide to Africa on a U.S. military plane, beginning seven years of exile. Three months later the invading soldiers were replaced by United Nations troops, to continue the U.S.-led occupation of Haiti by other means.

Since then the U.S. has backed a series of corrupt and brutal regimes, which have brought Haiti nothing but misery, death-squad violence and further impoverishment. Tens of thousands of workers took to the streets of Port-au-Prince in late February demanding a tripling of the paltry minimum wage, in an effort to keep up with the cost of living.

“Across Haiti, popular organizations are calling for the end of the U.S.-backed regime and the installation of a transitional government,” said the Haiti Action Committee. “Yet the Biden Administration continues to insist on its choice for prime minister, Ariel Henry, who has no mandate and no legitimacy.”

Speedy mass deportations back to Haiti

Meanwhile President Joe Biden has deported more than 20,000 refugees back to Haiti, in one of the speediest mass deportations in U.S. history. “Having fled from conditions produced by U.S. policy in Haiti,” said the committee, “they are now being sent back into the U.S.-created nightmare they fled.”

U.S. authorities did not follow the written procedures they are supposed to follow in dealing with political and other refugees, taking into account the real dangers they undoubtedly would face on their return. They simply rounded them up and flew them back to Haiti, in a careless and unfeeling manner.

The Haiti Action Committee is marking its 30th year in support of the fighting popular movement in Haiti, said co-founder Pierre Labossiere. Others participating in the rally included Students for Haiti Solidarity and Justice Vanguard, as well as Global Women’s Strike, Workers World Party, Black Alliance for Peace, Answer Coalition, Committee for Human Rights in the Philippines and the Coalition for Temporary Protected Status.

Bilal Ali, speaking for Black Alliance for Peace, said U.S. corporate brands like Old Navy continue to exploit the workers in Haiti’s sweatshops for poverty wages. A speaker from CHRP said the Philippines, like Haiti, has a long history of rising up against their oppressors, and in both countries the fighting people face U.S.-backed terror squads, with their unpunished killings and massacres in the popular neighborhoods.