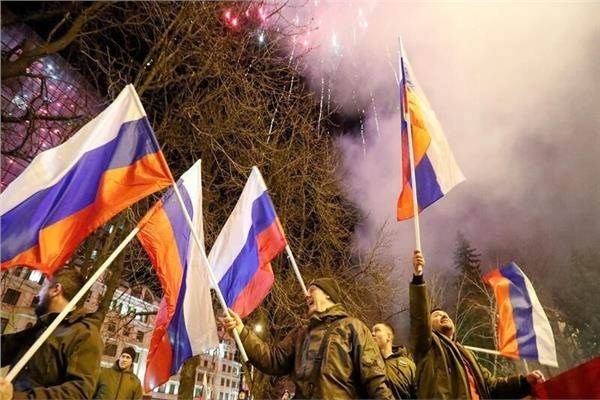 The people of the Donetsk and Lugansk People’s Republics celebrating Russia’s recognition of the independence of their republics, Feb. 21.

The Donbass people, much like the Palestinian people, continued to resist the dominance of global capitalism that supports fascism in Ukraine for eight years.

For those who claim President [Vladimir] Putin is a megalomaniac sociopath, intent on drawing Europe and the U.S. into some kind of Machiavellian war in order to massage his overinflated ego, let’s look at the facts, shall we.

Over the past eight years, Putin has avoided a conflict with Ukraine, and by extension the EU, United States and NATO, through his refusal to annex the Lugansk and Donetsk Republics or indeed to formally acknowledge them as independent states.

He allowed the Minsk Agreements 1 and 2, from 2014 and 2015, to form the basis of negotiations between the Lugansk People’s Republic, the Donetsk People’s Republic and the regime in Ukraine; [and] for over seven years the regime in Ukraine, to include the infamous fascist, pro-neo-Nazi nationalist, Ukrainian armed forces Azov Battalion, to continually violate the Minsk Agreements by shelling the independent republics with prohibited military munitions, causing death and destruction.

Zelensky being courted by the West took things further, when he escalated tensions and violence on the line of contact and prepared, in February, 120,000 Ukrainian soldiers to invade and reoccupy the Donbass region.

He stated publicly he wanted Ukraine to become a nuclear power.

Putin had only a few choices:

1) Allow Kiev to retake the Donbass Republics, thereby placing pro-Nazi Ukranian nationalists on its border; 2) recognize the two independent republics and send troops to protect them; or 3) recognize the two independent republics, followed by a limited incursion into Ukraine to disarm the fascists and save Europe from another war by eliminating the current Nazi threat today.

Some 27 million [Soviets] died defeating European fascism in WWII. Putin has prevented that from happening again.

Here is the background you will not read or hear on Western, warmongering media like the BBC: Victoria Nuland bragged in 2014 how the U.S. spent $5 billion creating the circumstances that led to a fascist coup in Kiev, toppling the democratically elected president. The Maidan Square protests were organized by pro-Western, anti-Russian Ukrainian nationalists and fascists, who used guns and violence to depose the government and orchestrate an antidemocratic, illegal takeover of power, which was handed to the fascist descendants of the pro-Nazi Bandera ideologists, who fought alongside the Waffen SS in the Second World War.

In Lugansk in the city of Krasnodon, a group of anti-Nazi teenagers, called the Young Guard, were active in resisting the German fascist occupation of Ukraine. Weeks before the Red Army liberated Lugansk in January 1943, the Gestapo kidnapped the Young Guard, which had up to 80 members, torturing and beating them. They threw some of the Young Guard into the 53-meter deep pit of Coal Mine Number 5, while some were still alive down the mine shaft.

Boulders were then dropped onto those who had survived the fall, until their cries of pain subsided. This is just one of the memories the people of Donbass recall about living under fascism. A museum to honor the heroism of the anti-fascist Young Guard can be found in Lugansk today.

That is why they denounced the illegal U.S.-financed coup of 2014 and refused to live under an undemocratic, fascist-installed coup. I have visited the mine, and I have shown my respect to those who were first tortured, beaten and then systematically murdered.

I understand how the murder of Russian-speaking trade unionists and others who were forced to seek refuge in the Trade Union building in Odessa on May 2, 2014, before fascists blocked the fire escape routes and systematically burned the building down, murdering men, women and children, many of whom had been physically assaulted, has had a profound effect upon the Donbass people.

The people of the Lugansk oblast, the Donetsk oblast and the Crimea exercised their inalienable right not to be forced to live under an illegal coup. These people with no army, no air force and no navy, much like the Palestinians, chose the path of resistance.

First they stood in front of the occupying tanks; and when the people were murdered by their own army, then they turned to armed resistance. I have seen burial cemeteries and mass graves. As the morgues were; the people were laid to rest together.

I have spoken with their families. They told me how Ukrainian snipers shot men, women and children who went to the river to draw water, as all drinkable water was contaminated. It was either being murdered or dying of thirst, [to] risk drawing water in the open.

A limited war of liberation saw a portion of the Donbass break away from the fascist-controlled Ukraine government and set up two autonomous regions. Crimea held a referendum where the people voted to join the Russian Federation. And both Lugansk and Donetsk held elections, where the people voted to support independence; and the Republics of Lugansk and Donetsk were born. I was an election monitor.

In 2014, the Minsk Protocol Agreements saw an acceptance by the government in Ukraine that both new republics would be viewed as autonomous regions, and that a ceasefire would be introduced. Large-caliber munitions such as artillery shells would be prohibited.

A de facto peace, which was periodically broken by Ukrainian artillery attacks on Donetsk, was largely observed. The OSCE, the Organization for Security and Cooperation in Europe was positioned to monitor the cease-fires.

During Donald Trump’s presidency, there was no U.S. focus on the Ukraine issue. His “America first” policy and the new enemy they were creating, the “Yellow Peril” of China with its growing economic global dominance, meant there was no real U.S. destabilization of the Donbass/Ukraine cease-fire.

There was relative peace in the region 2015-2022, but now threats of thermonuclear “Armageddon” war against Russia is being openly promoted and debated by U.S. officials.  [Joe] Biden was vice president to President [Barack] Obama and Victoria Nuland’s boss in 2014, during the Maidan Square pro-EU fascist coup.

President George Bush, a Republican, bombed Saddam Hussein’s Iraqi army out of Kuwait. He is rumored to have said he should have finished the job during the first Gulf War. Under George W. Bush, also a Republican president, who was following [in] his father’s footsteps, and probably after a family dinner, set in motion his father’s plan to finish off Saddam.

The untruth of weapons of mass destruction was invented; and alongside Tony Blair, they both lied and led us into an illegal war.

Are we witnessing history repeating itself, yet again?

When Biden came to power, Russia was still the new-old enemy. Is he finishing the outstanding business of 2014, when they let 2 million people escape the clutches of the fascist coup? Biden may appear to be a weak, senile, mumbling old fool, but somewhere in his heart, when it beats, there is a cold, calculating politician devoid of empathy and humanity.

After pouring 90 tons of “lethal aid,” weapons of mass destruction into Ukraine and billions of dollars in continued support, Ukraine, which is now bolstered with EU, British and NATO support, feels strong enough to reoccupy the separatist areas of Donbass.

A local militia of lightly armed men of [ages] 18-55 is all that stands in the way of a fascist coup-led government in Kiev, made in the image of the Bandera-supporting-Waffen SS Nazi era, from occupying Donbass.

Fascism is on the rise all over Europe

Nationalism is being encouraged to foment anti-Russian sentiment. We are back in the 1930s with NATO, the new alliance against neofascism, which they are openly supporting now, but against Mother Russia.

During the Cold War, the fight was against communist Russia and the Soviet Union.The Soviet Union no longer exists, thanks to Gorbachev and Yeltsin. Russia is led by oligarchs and millionaires, just like most other European countries and the U.S. It has a capitalist-driven economy and a capitalist ruling class.

What drives the capitalist war economy?

Where is the profit to be found in the Ukraine-Donbass-Russian conflict?

Russia has built a gas pipeline in conjunction with Germany to supply cheap energy to Europe. The Nord Stream 2 pipeline will deliver billions of cubic meters of gas from the Russian gas fields to Central Europe and Britain.

This is a win-win for Russia and Europe. Russia exports gas at a profit pricing. Europe imports cheaper Russian gas, rather than using its existing suppliers in the open market. The pipeline will bypass Ukraine, a country which already needs Russian gas supplies to keep its homes warm and the fires of industry lit.

The U.S. is at present supplying more of Europe’s energy requirements than Russia. It is currently the biggest oil producer in the world, ahead of both Saudi Arabia and Russia.

Shale gas extracted via the disputed fractionation process [fracking] is being transported to Europe in the form of liquefied natural gas. U.S. shale gas is only extracted when the price of gas is high, making the venture economically viable. U.S. gas companies need to control the price of gas to remain artificially high in order to make a profit.

The U.S. administration and President Biden have long been cajoling the German Chancellor and the German government to abandon the Nord Stream 2 project and impose sanctions on Russia over the Ukraine/Donbass issue.

If we add the weapons sales to Ukraine from America to the profits that engorge U.S. energy sales to Europe, with the now-promised continued, short-term and long-term financial support of Ukraine, with billion-dollar loans from Western financiers, global capitalists and the banks, I think we can clearly see what is really at stake in Donbass.

The U.S. is trying to lure Russia into the conflict in order to impose sanctions and scrap the Nord Stream 2 pipeline.

Billions of dollars of profit for shareholders are to be made from selling financial services loans to a failing Ukrainian government, indefinitely. For the U.S., the war in Donbass is no more than a vehicle to create profit with the bonus of further marginalizing and isolating Russia in a continued economic war of global dominance.

One-to-one level, everything we witness is a fight between the capitalist classes of many nations fighting over the resources of countries that are vulnerable to capitalist superiority through military and financial destabilization.

Yet the people of Lugansk, Donetsk and Crimea have the right not to live under an imposed fascist coup. They have democratically elected leaders in place, mandated by the people. They are Russian-speaking citizens with long cultural, historical, economic and family ties to Russia.

Should the fascists in Ukraine launch an all-out invasion of Donbass, we must stand with the people of the region in the face of a resurgent Western-armed and financed fascist regime.

Say no to capitalist wars of aggression. Say no to wars for profit. Say no to fascism. Say no more Russians should die in Europe defeating fascism.

A political ideology is being used by the West in central Europe to light the fires of Russophobia. I stand with Donbass!