President Emmanuel Macron of France announced that French troops will be pulling out of their bases in Gossi, Menaka and Gao, which are all in eastern Mali, near the three-border area with Niger and Burkina Faso. 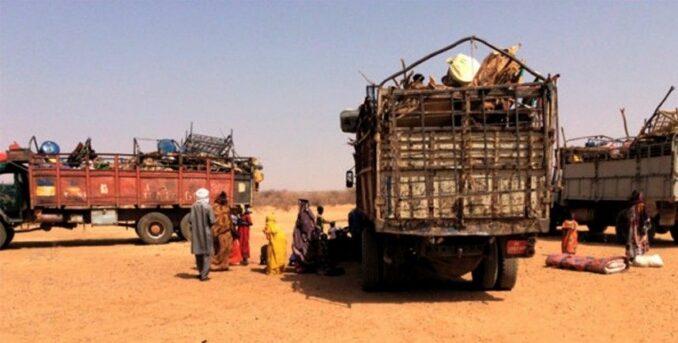 Local communities sent support and trucks to help move people and their belongings out of the beleaguered Tessit region.

He made this announcement before a summit between the European Union and the African Union, Feb. 17 in Brussels.

“We cannot remain militarily engaged alongside de facto authorities, whose strategy and hidden aims we do not share,” Macron said, referring to the Mali government’s contract with Russian-based companies offering Russian military advisers to provide training.

That’s France’s excuse for leaving. The French neocolonialist military was allowed in to aid the battle against the Islamic State or al-Qaida affiliates in Mali. Those kinds of groups have flourished in Mali and the entire region since NATO destroyed the Libyan government in 2011, which spread instability.

The French failed to stop IS and al-Qaida, even though these groups are fighting each other, as well as the French and MINUSMA, the U.N.’s 15,000-strong peacekeeping force, and the Malian army.

The French regime has been forced to confront a militant and growing mass popular resistance to its neocolonialist presence in the whole Sahel, the region south of the Sahara desert. Protests against the French presence have been growing in Burkina Faso, Niger, the Ivory Coast and Guinea, as well as Mali.

What just happened in the Tessit region is an example showing the instability of parts of Mali. Islamic State forces attacked some local Tessit villages Feb. 8-10; they destroyed schools, a clinic, water tower and some homes. They killed about 40 people and ordered the rest to leave. A few days later, al-Qaida forces came through, accused people of supporting IS and killed more people.

The local communities sent trucks to help the people in the area move their belongings to safer areas.