Despite gale warnings, the Berlin Peace Coordination drew a thousand people to a Feb. 18 antiwar rally on the Platz des 18. März at the Brandenburg Gate in Berlin, under the slogans “Stop the media warmongering and NATO aggression policy” and “Disarmament and peace with Russia.” Among the participants were members of the Left Party, the German Communist Party and the Friends of Nature. 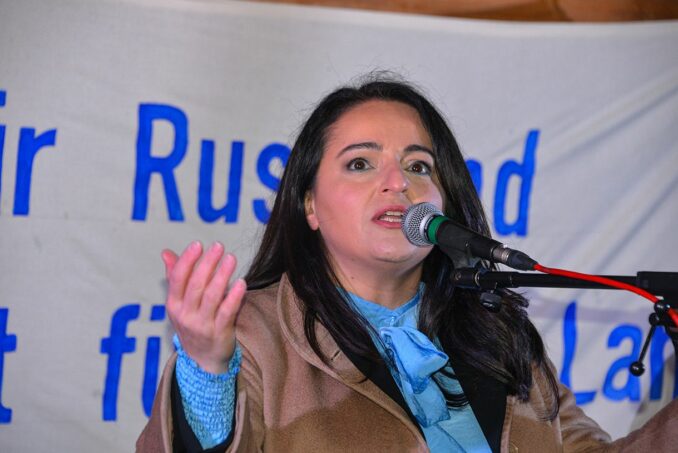 Left Party member of the Bundestag, Sevim Dagdelen, to the cheers of the crowd, exposed the government and media campaign, initiated by the United States and followed in Germany, which accuses Russia of preparing aggression. “The saying that the first casualty of war is truth,” she said, “is out of date. Today, long before the war starts, the U.S. intelligence agencies knock the truth unconscious to prepare the population for war.” (Junge Welt, Feb. 19, rally video)

Dagdelen referred to lies Washington used to prepare and justify wars in the past, such as Colin Powell’s fabrication in 2003 about Iraq’s alleged weapons of mass destruction and the 1964 fake attack on U.S. destroyers in the Tonkin Gulf. She said the people must have no confidence in so-called intelligence from Washington on alleged Russian preparations for attacks.

Dagdelen pointed out that the starting points of the current escalation were the Ukrainian combat-drone attack on the Donbass in October and the New Year’s speech by Ukrainian President Volodymyr Zelensky, in which he declared his intention to seize the Donbass with military force.