Workers World Party joins with the many antiwar and anti-imperialist organizations, here and around the world, in raising the unifying slogans: “NO WAR! NO SANCTIONS! NO NATO!” We call for international emergency mobilizations for actions March 1-7 around this program. 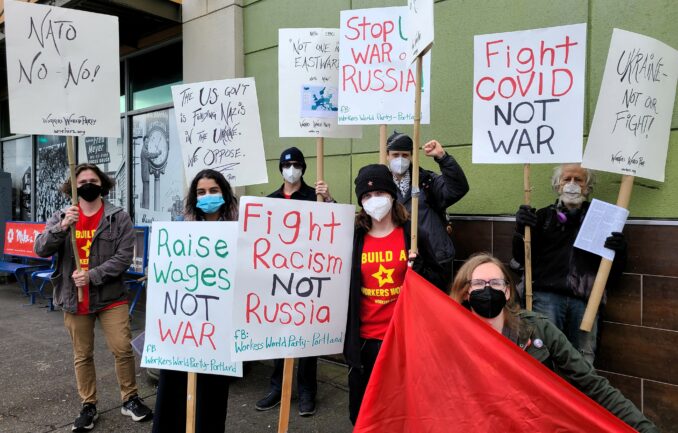 The corporate media have spoken with one voice in the period leading up to today’s blaring headlines accusing Russia of “invading” Ukraine. For months, the bipartisan message from Capitol Hill and the White House has been to demonize Russian President Vladimir Putin as the aggressor for mobilizing troops within Russia near the border with Ukraine.

For eight years, since the U.S.-backed coup in Kiev, Washington has supported the neofascist regime in Ukraine with dollars and weapons, as the Ukrainian regime’s army relentlessly shelled the Peoples’ Republics of Lugansk and Donetsk, killing thousands of people in the Russian-speaking Donbass region.

Since 1991 the U.S. has aggressively expanded NATO membership from 16 to 30, creeping toward Russia’s borders and arming NATO air bases with supersonic bombers and rockets that can strike Russian cities with nuclear weapons within 30 minutes. NATO has held war maneuvers near Russia’s borders and coastlines.

The U.S. has imposed multiple sanctions on Russia before this month and has just imposed new sanctions choking Russia’s vital natural gas exports. Sanctions are an act of war.

A destructive war in Ukraine and Russia could be the beginning of a wider world war to assert total U.S. hegemony over the rest of the world — Europe, Asia, Latin America and Africa, most particularly China.

Polls show that a majority of working-class and oppressed people here do not want a new U.S. war. They have nothing to gain. Only the corporations and their politician friends stand to benefit.

We say NO! Money for jobs, education, health care and human needs, not war!