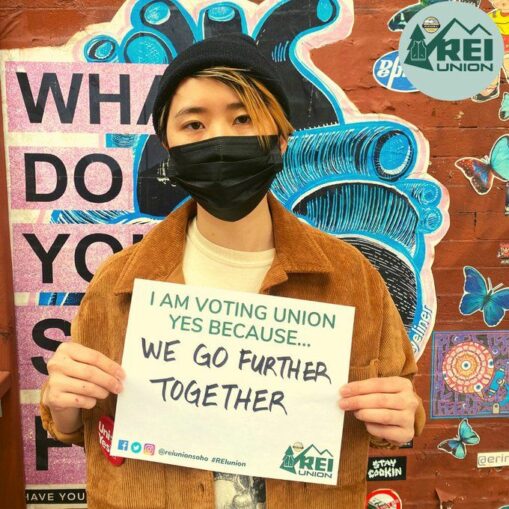 The UFCW then filed Unfair Labor Practice charges with the NLRB against Coffee Tree Roasters after barista Liam Tinker was fired the day after the election filing; Tinker had appeared in a video announcing the union campaign. “It’s not too hard to figure out what happened here,” said Wendell Young IV, President, UFCW Local 1776. “[But] I think they picked on the wrong group to do that. This is a really well-committed, well-organized group of workers.”

REI is not “woke”

Workers at the Soho REI store have filed for a union election. The 116 workers are organizing with the Retail, Wholesale and Department Store Union (RWDSU). Given REI’s corporate image of being pro-worker, voluntarily recognizing the union would seem likely. Not so of course — REI is just another example, like Starbucks, of capitalists adopting a progressive public personna, when in truth they are driven to profit at the expense of exploited workers.

In a union-busting attempt, REI created a ridiculous podcast where CEO Eric Artz answered questions from Wilma Wallace, the company’s chief diversity and social impact officer — yes, that is really her title. In the podcast, the two introduce themselves by stating their pronouns and an Indigenous land acknowledgement, in a contemptible attempt to sound “woke”.  The conversation goes on to tout the company’s social justice stance and how a union would hinder communication between worker and boss.

This paternalistic approach may not fool anyone. However, union organizers must inoculate workers who may be on the fence against these tactics that are meant to confuse and scare workers. It’s important to remember that in 2016, REI workers in Seattle attempted to unionize. Workers there described wages so low that some were forced into homelessness.

Unless you have been living under a rock, you are aware of the supply-chain fiasco exacerbated by the COVID-19 pandemic. Railroad workers have been suffering under the “essential worker” yoke, because of the adoption of just-in-time practices and cuts to their workforce. The 17,000 conductors and engineers of BNSF, a Class 1 railway, have said “enough!” The last straw came when BNSF bosses unilaterally instituted a new time-off policy that would penalize workers for taking a day off for any reason. (tinyurl.com/mu5td6n5)

Railway workers are already on a 24/7 on-call schedule. Their response — a strike on Feb. 1 — was stymied by a judge’s Temporary Restraining Order (TRO) ruling that would hold the workers and BNSF’s two largest unions, the Brotherhood of Locomotive Engineers and Trainmen (BLET) and the Transportation Division of the International Association of Sheet Metal, Air, Rail, and Transportation (SMART-TD) in contempt of the Railway Labor Act of 1926.

The unions appealed to the secretaries of Transportation and Labor to intervene, but the Biden administration has failed to act. Rail remains one of the most heavily unionized industries in the country, and railroad workers maintain the vital supply chain. Workers of the major rail companies are understandably angry over the impact of extreme cost-cutting measures, including reducing train crews to one operator, poor COVID-19 protections, as well as long hours without like time off. They are frustrated by the slow steps of negotiations under the RLA. Contract negotiations covering 115,000 rail workers in the U.S. at major Class 1 Railways are expected to heat up in 2022.