Haiti faces a crisis of government legitimacy. The only elected officials in the country at any level whose terms have not expired are 10 senators. The date for the expiration of the term of Haiti’s President Jovenel Moïse would have been Feb. 7, 2022 — before he died by assassination July 7, 2021. 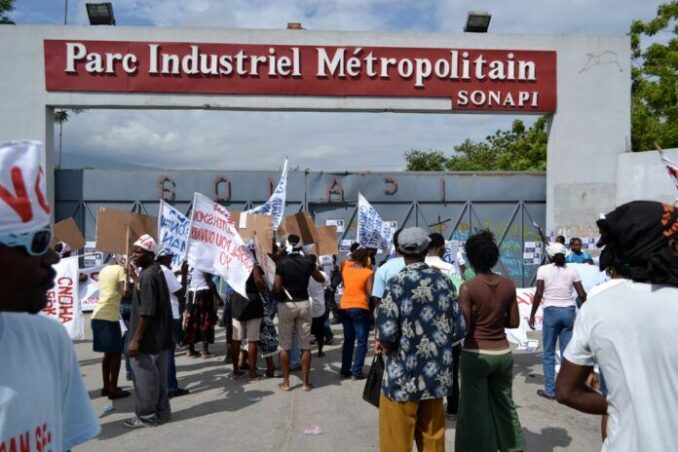 The significance of that date was emphasized by stories on Haiti run Feb. 7 by the Washington Post, New York Times, BBC, as well as the Miami Herald — the U.S. bourgeois newspaper with the most extensive coverage of Haiti.

But Haitian workers have another problem they want to address. The minimum wage for workers in the export sector of the country’s economy has not been raised for three years. The commission that sets the increase, which is based on various factors, is supposed to meet three months before each fiscal year begins, but it has not convened for over three years.

Thousands of workers walked out in demonstrations Feb. 9 and 10 to demand 1,500 gourdes for an eight-hour day — $14.49 in U.S. dollars. The two-day job action shut down the major manufacturing park of the export sector, Sanopi, in the capital city of Port-au-Prince.

A union official, Pierre Télémaque, told Haïti-Liberté that inflation had reached 26%. High inflation and a low minimum wage provide a good explanation of why 40% of Haitians don’t get enough to eat and are food insecure. (tinyurl.com/bdht7zrh)

The head of the commission which sets the minimum wage released a statement Feb. 8 saying the commission would send a request to de facto Prime Minister Ariel Henry to approve a new minimum wage. Workers have warned that if the increase is not enough, they will continue their walkouts.

Feb. 7 was not only the anniversary of the assassination of Jovenel Moïse. On the same date in 1986, dictator Jean-Claude “Baby Doc” Duvalier fled for his life in a U.S.-supplied plane out of the country. Many schools, banks and businesses closed this Feb. 7 out of fear of a social eruption.

According to CNN, the investigative judge on the assassination, Garry Orélien, who has since resigned, said he believes that de facto Prime Minister Henry is complicit in the assassination of President Moïse, who appointed him as prime minister only two days before Moïse was killed.

“Do you think I can touch Ariel (Henry) now?” Orélien said on a recording that CNN obtained. “How can I do that? I won’t be able to give (any order to indict him); it won’t see the light of day.” (edition.cnn.com, Feb. 12)

Disentangling the role the United States has played in Haiti’s governmental crisis, in the midst of the earthquakes and hurricanes that have hit the country, is hard to do. But Haitian activists feel the U.S. has had a decisive role.

The de facto prime minister and his opponents, under tremendous pressure from the U.S. and imperialist partners like France, are maneuvering to come up with a deal to govern the country until elections can be held.

It is inconceivable that any such deal will do anything to reduce the suffering and hardship of Haitian workers and peasants.