Education workers are adding to a recent surge of worker organizing across the country and around the world, a surge that is energizing the solidarity of the working class. This surge is reminding the capitalists that they are dependent on the labor of workers and that decent wages and safe working environments are not a privilege but a right. 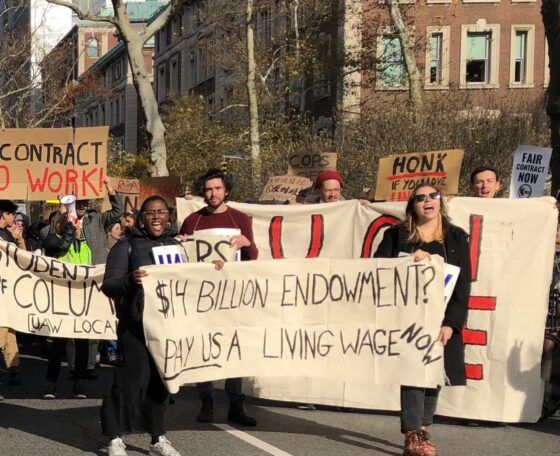 The ability of educational institutions to function depends on the skilled work of K-12 teachers, higher education teachers, teaching assistants, bus drivers, cafeteria workers, custodians and many others, who are rightfully demanding that they be fairly compensated for their indispensable work.

Student Workers of Columbia, United Auto Workers Local 2110 members voted Jan. 28 to accept a new contract with Columbia University, following a long and arduous 10-week strike that began Nov. 3, 2021. This was a resounding win for the union, which secured a 6% retroactive wage increase, an expansion of union membership to include teaching assistants and research assistants, the right of workers to involve third-party arbitration in the case of sexual assult or discrimination, as well as many other changes essential to their demands.

At the end of January, student workers at Ohio State University, many of whom work in the dining hall, gathered to demand higher wages. Jobs like these, which are essential to campus life, are usually performed by the poorest and most oppressed members of the campus community. These jobs often provide less compensation than those with off-campus employers. Because they can’t afford to live on campus, some students spend their time commuting, which disproportionately affects their academic performance compared to their peers.

Teachers in Puerto Rico have been walking off the job this week and joining thousands of public sector workers in the capital of San Juan to protest low wages. Much of the unrest comes after a teacher, Pablo Mas Oquendo, died in a car crash, presumably from exhaustion on the way home from his job as a security guard, one of three jobs he needed to support himself.

Struggling for more than economic demands

In solidarity with their Indigenous membership, Boston School Bus Drivers, Steelworkers Local 8751 rejected an agreement last week with Transdev and the City of Boston, which actually offered them a higher wage increase than they were asking for, but which denied acknowledgement to National Day of Mourning in place of the Thanksgiving holiday. The offer was brought to the table just hours before the union planned to vote on a strike. This is an indicator of the leverage workers have in this current historical period, and it highlights the power of worker organizing to influence social and political conditions even beyond the workplace, setting precedents for society as a whole.

To this point, education workers have been influencing public policy regarding COVID-19 protocols as well. In order to avoid a strike by teachers in Oakland, the Oakland Unified School District reached an agreement Jan. 24 with the Oakland Education Association to improve COVID-19 safety procedures and testing practices.

Workers in the U.S. are being brutally confronted by the failure of electoral politics to improve their working conditions and standard of living, to address climate change, to contain an epidemic, to prepare for natural disasters and to end racism. They are reawakening, realizing their own agency and responsibility as workers to change their conditions.

The U.S. is controlled by corporate interests; and so long as corporations think they have unlimited power, they will control politics. Conversely, as workers seize our own power and fully realize the strength we have in numbers and necessity, we can begin to build a world that is designed and maintained for us — not the capitalist ruling class.