Bulletin: Protests were held around the U.S. Feb. 15 in solidarity with the Memphis 7.

Seven Starbucks workers at the Poplar and Highland Starbucks in Memphis, Tennessee, were fired Feb. 8 in the most vicious and blatant act of union busting by the company so far. These firings accounted for approximately 35% of the total workforce in the store, according to the press statement released by Starbucks Workers United. Among those fired was the entire union Organizing Committee, comprised of mostly Black and Brown workers. 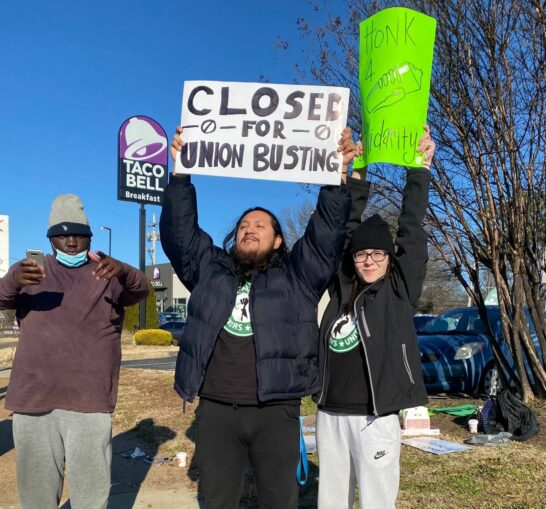 “I was fired by Starbucks today for ‘policies’ that I’ve never heard of before and that I’ve never been written up about before. This is a clear attempt by Starbucks to retaliate against those of us who are leading the union effort at our store and scare other partners,” said Nikki Taylor, a shift supervisor and union organizer at the store.

Workers were fired for a series of minor offenses, some of which were alleged violations of policies workers were unaware of and hadn’t been trained on. Many of the violations, such as going behind the counter or entering the back of the store when they’re off the clock, are policies that have been regularly unenforced and are now being selectively enforced by the company to bring the hammer down on the union organizers.

One fact that cannot be ignored is the vile racist character of this particular instance of union busting. Starbucks has used a wide variety of tactics to intimidate and silence union supporters across the country, yet a mass firing such as this has not been used up to this point. When this Memphis store filed for a union, it did so on Martin Luther King Jr. Day. In the letter to CEO Kevin Johnson, the Organizing Committee wrote: “Please, in memory of Dr. Martin Luther King Jr., do not bring your so-called ‘pro-partner’ anti-union campaign to Memphis.”

Despite this plea, Starbucks made no hesitation to terminate this entire Organizing Committee.

The reality is that the violations cited by the company for the firings are things that many Starbucks workers across the country have done, or do on a regular basis, without suffering termination. Starbucks spokesman Reggie Borges said about the firings: “These egregious actions and blatant violations cannot be ignored.” It’s obvious that the difference here, the real “egregious” unforgivable act, in the eyes of Starbucks, is that these workers dared to file for a union election?

What about the egregious acts of union busting and countless blatant violations of labor law committed by Starbucks around the country since the union drive kicked off in August? The fact is that while Starbucks nitpicks over policy to stack petty violations against union organizers in Memphis, the company is waging a relentless campaign against its workers across the country with no regard for the laws it may violate in the process.

Protesters gathered outside the Memphis Starbucks store where the firings took place to join a picket line Feb. 9, forcing the store to close around 12 noon and remain closed for the rest of the day as well as the next day. Whether or not Starbucks gets away with this brazen mass firing will depend on how the workers and public respond. So far, the righteous outrage is growing as is the rapidly expanding network of stores that have filed for a union election.

Today, Feb. 10, in New York City three stores, located in Astor Place, Chelsea and Brooklyn, have filed for a union election, along with a fourth store on Long Island. The Chelsea location is a Roastery Manufacturing Store, a more significant location compared to some of the regular Starbucks cafes.

This brings the total number of Starbucks shops filing for a union to a whopping 72, as of this writing. Both the union busting by Starbucks and the wave of workers joining the fight show no signs of slowing down, but the real power will always be in the hands of the workers. 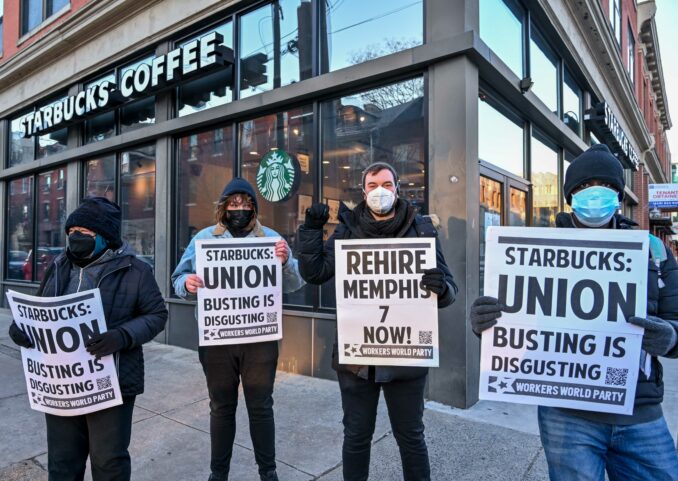 Philadelphia, Feb. 15, 7 am, at Starbucks store at 9th and South streets.

The ruthlessness employed in Memphis against this committee led by Black and Brown workers is characteristic of the way that capitalism as an economic system has always imposed the most suffering on Black and Brown people. Despite Starbucks’ “progressive” appearance and dishonest embrace of the slogan “Black Lives Matter,” the veneer of social justice is quickly abandoned when it comes time for the company to stomp out worker power.

Workers World Party demands that Starbucks rehire the Memphis 7 and immediately cease its union-busting operations and recognize the union at all stores that have filed!

The author is a Workers World contributing writer and a union committee organizer with Starbucks Workers United in Buffalo.