The family of Tamir Rice recently received another piece of infuriating news. The U.S. Department of Justice refused to reopen the case against two Cleveland police officers who murdered the 12-year-old African American youth Nov. 22, 2014. 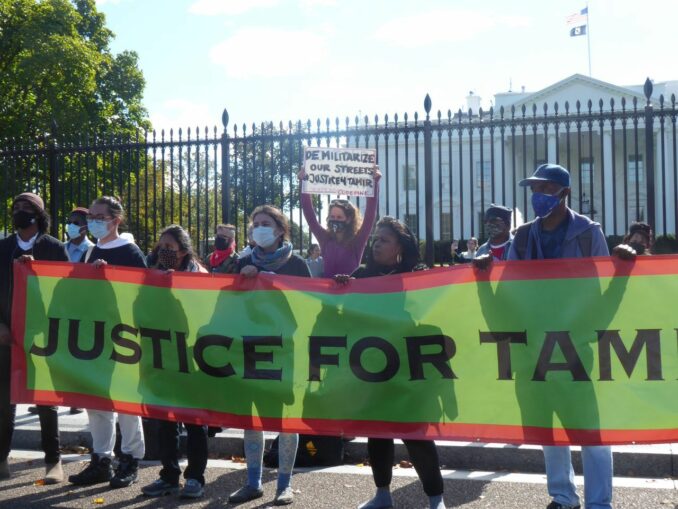 Without bothering to notify the Rice family attorneys, the department had quietly closed the case in 2020, while President Donald Trump was still in office. News reporters leaked the department’s decision, which was opposed by veteran civil rights attorneys assigned by the Justice Department to prosecute the case.

Tamir’s family and supporters were hoping, with Joe Biden now president, the case would be revisited and a grand jury investigation would be initiated. Tamir’s Campaign for Justice demonstrated in Washington, D.C., in October to demand the misnamed Justice Department reopen the case. On multiple occasions the campaign, led by Tamir’s mother Samaria Rice, submitted additional evidence against Tamir’s killer, Timothy Loehmann and Loehmann’s partner, Frank Garmback.

Assistant U.S. Attorney Kristen Clarke wrote in a Jan. 28 letter that the department would not reopen the case, because the new information would not prove a federal civil rights violation “beyond a reasonable doubt” and thus did not change the 2020 decision when “career prosecutors determined that the federal government could not meet this high standard.”

Of the decision Samaria Rice said, “I’m devastated and disgusted by it. I have no understanding how a 12-year-old boy can’t get justice in this country. I’m at a loss for words. It’s pitiful and pathetic. It shows that the system is unfair and unjust.”

“The family is justifiably furious,” added Jonathan Abady, one of the family attorneys. “There’s no apparent recourse or relief through the Justice Department to hold these officers accountable for something that was essentially a drive-by shooting of a 12-year-old boy.” (cleveland.com, Feb. 1)

Loehmann killed Tamir just seconds after arriving at the spot where the youth was playing with a pellet gun. The Cleveland Police Patrolmen’s Association continues to maintain the murder was “justified.” County Prosecutor Timothy McGinty refused to charge the officers with any crime, and neither were fired for Tamir’s killing.

The case reveals the shameful conduct of Democratic Party politicians, from McGinty to Biden. Cleveland has not had a Republican Party mayor since 1988. Neither party can be relied on to bring justice to victims of racist police violence.