Ottawa: Even though Ottawa’s premier, Doug Ford, declared a state of emergency on Friday, Feb. 11, threatening harsh penalties, and local police were reinforced with provincial and federal officers, the cops have not done much to unblock Canada’s capital. Some truckers have removed their tires and drained their brakes to make their trucks very difficult to move. Towing companies are reluctant to tow their best customers. 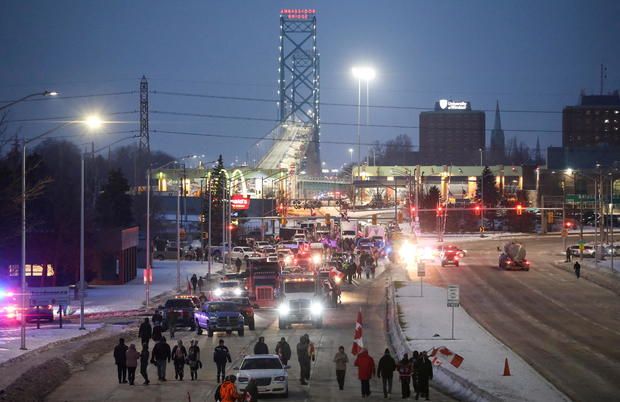 Windsor, Ontario/Detroit, Michigan: The Ambassador Bridge is the major economic issue in this protest, connecting two auto-production cities. Police had gotten most of the heavy rigs off by midmorning Saturday. At 2:00 p.m. there was still a sizable crowd of pedestrians and a few cars on the bridge. Twitter video clips showed some families in the crowd and protesters picking up trash.

The trucker protest in Ottawa involving COVID-19 mandates, which began Jan. 28 in response to the Canadian government requiring all truckers crossing the U.S.-Canadian border to be fully vaccinated, has clearly morphed into an attempt to push out the current Canadian government.

Beyond the occupation of Ottawa, whose narrow streets are easy to clog, the occupation of the Ambassador Bridge linking Windsor, Ontario, to Detroit, Michigan, is a major blow to the Canadian economy and is restricting production in automobile companies in both countries. Each day $300 million worth of goods move over this bridge, a quarter of all U.S.-Canada trade.

The Joe Biden administration urged Canadian Prime Minister Justin Trudeau to take firm measures to end this blockade, which is severely affecting the economy — particularly the auto industry, Ford, Stellantis and Toyota — located within the United States. A number of small- and medium-sized companies in Canada have already had to close for a few days or limit operations.

The truckers have completely blocked downtown Ottawa for over a week. Until a local resident got a temporary restraining order, they used their air horns, making a howling, sleep-depriving din for 18 hours or more a day; ran their diesel engines; stole food from homeless shelters; set off fireworks with abandon and attacked passersby. Most of the restaurants and small stores in downtown Ottawa have had to close for lack of customers.

The soup kitchen Shepherds of Good Hope is a few blocks from Parliament Hill and generally serves 500 to 700 meals a day. Some mandate protesters entered Jan. 29 and demanded food from the staff, who gave them some. As the news of free food spread, protesters kept on coming in, and arguments grew heated. After this harassment made the news, the kitchen got over 10,000 donations. (cnn.com, Jan 31)

Most protesters either own their trucks or are owners of small companies, who have also encouraged their employees to join this movement. Most workers in the trucking industry are employed by large trucking companies and do not support this anti-mandate movement.

Since Canadians trust their universal health system, the vaccination rate is high. Nationwide 84% of Canadians are vaccinated; in a few provinces, the rate is 79%; in Newfoundland it’s 95%.

Both the Teamsters, who represent about 15,000 Canadian truckers, and the Canadian Truckers Association have pointed out that well over 90% of Canadian truckers are fully vaccinated. The Teamsters have said that the demands of the Freedom Convoy don’t address the real issues truckers have: wage theft, salaries, the cost of insurance and long driving hours that pose health and safety risks.

The Teamsters issued a statement Feb. 10 about the blockade on the Ambassador Bridge. They denounced “the ongoing Freedom Convoy protest at the Canadian border that continues to hurt workers and negatively impact [the] economy. The livelihood of working Americans and Canadians in the automotive, agricultural and manufacturing sectors is threatened by this blockade.” (teamster.org, Feb. 10)

The so-called “Freedom Convoy” crowd sourced its attacks through a GoFundMe page, raising C$10 million in under two weeks. The funds kept coming until GoFundMe shut down the effort, froze the funds and then announced it would be automatically returning all non-dispersed funds, about C$9 million, because of the violent and harassing behavior of the Convoy participants.

Avi Lewis, a professor at the University of British Columbia, told Chris Hayes of MSNBC Feb. 8, “There is just no way there’s that much money in Canada. So, this is an expression of far-right populism and far-right organizing that goes far beyond our borders.”

Far-right politicians in the U.S. have been eager to show their deep support for the Freedom Convoy. To Senator Ted Cruz, they are “heroes.” He released a statement that said: “They are patriots, and they are marching for your freedom and for my freedom. They are — those truck drivers, God bless them. They’re defending Canada, but they’re defending America as well.”

Texas Attorney General Ken Paxton and other state attorneys general are seizing the opportunity to charge GoFundMe with deceptive trade practices for taking down the page.

Florida Governor Rick DeSantis is happy to make a buck selling “Truck Yeah” T-shirts from his campaign website. The far-right agitator Donald Trump has invited the truckers to speak out on his new social media platform, while he characterizes the centrist Trudeau as being “far-left.”

There are similar, copycat right-wing protests in Australia, New Zealand, France and in New York and Alaska.

A statement from the Communist Party of Québec points out: “This movement has become, in a few days, a symbol for all those who are more and more shocked by everything that is happening in our society, but who — and this should not be underestimated — are also more and more attracted to right-wing and even extreme right-wing movements.”

The statement goes on: “All this reminds us at the same time how, just because people demonstrate in the streets or on the roads and/or carry out other more direct types of actions, it is not necessarily for a good cause. Although they constantly repeat the word Freedom, most of these people are thinking above all about their own individual freedom and not about the common good.” (pcq.qc.ca, Jan. 29)

These trucker convoys, which fail to raise the key work issues of truck drivers in both countries, are being well financed by U.S. reactionary movements and getting tremendous business media attention. Meanwhile, Big Media is barely acknowledging the enormous U.S. worker resurgence underway and growing — the strike wave this past fall, massive education and health worker organizing, the unionization struggle spreading like wildfire through Starbucks, the drive to unionize Amazon, one of the biggest high tech exploiters in the world.  Working-class activists can take heart from these developments and more.