The following slightly edited WW editorial first appeared on workers.org Feb. 24, 2016, with the headline “Tear down the walls!” A main focus of the editorial was the release of Albert Woodfox from Louisiana State Penitentiary, aka Angola Prison. Woodfox along with Robert King and Herman Wallace were known as the Angola 3 and were held in solitary confinement for decades. King and Wallace were released in 2001 and 2013 respectively. Wallace died three days after his release from liver cancer. In honor of Black History Month and the heroic resistance of the Angola 3 and all those behind the walls, WW is reprinting this commentary. 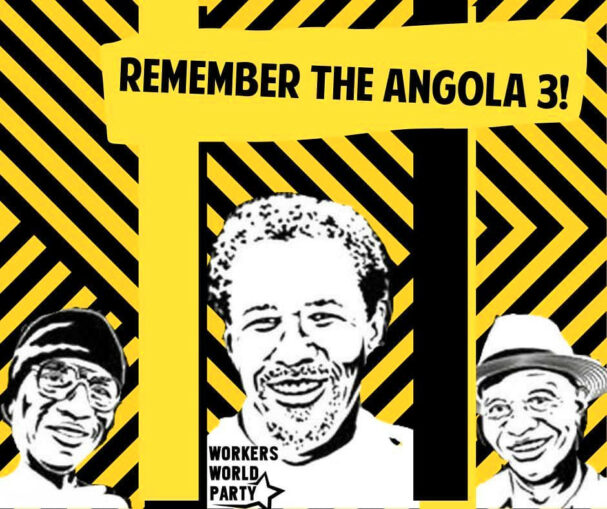 At last. After 43 years and 10 months banished to a 6-by-9-foot cell by Louisiana prison authorities, Albert Woodfox was released — on Feb. 19, his 69th birthday. Woodfox’s bravery, strength and integrity inspired his many supporters worldwide.

The Angola 3 — Woodfox, Robert King and Herman Wallace, all African Americans — were exiled to solitary confinement for decades for protesting racial oppression inside the hellhole known as Angola prison. Their case and that of African American journalist and political prisoner Mumia Abu-Jamal, also isolated for decades, among others, put a global spotlight on U.S. prisons’ use of this heinous practice and other torturous treatment of prisoners.

Woodfox describes the horrors of prolonged isolation, causing some prisoners to be catatonic, scream or self-mutilate. At times, he suffered from claustrophobia and panic attacks. But Woodfox avidly read newspapers, watched television news and thought about politics. He says prisoners who could not read or write suffered even more, as they had no mental diversions.

“Solitary confinement is the most torturous experience a human being can be put through in prison. It’s punishment without ending. It is evil. We have to stop this,” Woodfox told the Guardian newspaper on Feb. 20, 2016. Woodfox vows to direct all his efforts to “ending the barbarous use of solitary confinement.”

The U.S. has the highest incarceration rate in the world, with 2.3 million prisoners. Some 80,000 are held in solitary confinement. This racist criminal (in)justice system disproportionately jails African Americans and Latinos/as, who together make up the majority of inmates and are more likely to be banished for years in isolation.

Not only must solitary confinement be ended, but the entire rotten prison system needs to be uprooted. Decades ago a founder and late chairperson of Workers World Party, Sam Marcy, called prisons “concentration camps for the poor.” The poorest and most oppressed people make up the vast majority of those behind bars, victims of both capitalist exploitation of the working class and the added-on national oppression that comes from this country’s racist history of slavery and imperialist expansion.

Marcy’s understanding of the state was based on Marxism. The repressive apparatus, including prisons, has been erected to protect capitalist property and ensure that the wealthy can continue to squeeze ever greater profits out of the labor of the working class. The state’s role is also to suppress struggle and resistance. The greater the gap between rich and poor, the more workers and oppressed people end up in prison.

To rebel is justified

WWP set up the Prisoners Solidarity Committee some 45 years ago in solidarity with prisoners rising up against their horrific conditions. During the heroic Attica uprising in 1971, which New York officials brutally repressed, prisoners invited the PSC to come to the prison and tell their story to the world.

This newspaper has supported many prisoners’ struggles and rebellions in print and on picket lines throughout our history. This is a cornerstone of our political program. WW has backed the Angola 3, Mumia Abu-Jamal, Native prisoner Leonard Peltier, the Move 9, the Cuban 5, Oscar López Rivera, Lynne Stewart, Russell Maroon Shoatz and hundreds of other political prisoners over the years.

WW hailed the courageous hunger strikers in California’s correctional facilities. Hundreds of prisoners at Pelican Bay State Prison led the first action in July 2011. They sought humane treatment and an end to solitary confinement and other “intense torture.”

Quickly, more than 6,000 inmates at 11 prisons joined them. Despite repressive policies meant to stop just such resistance and collective action, the will to resist prevailed. Two summers later, 30,000 prisoners in isolation and general population throughout the state’s penal system joined two hunger strikes.

This newspaper’s editorial page wrote on Sept. 7, 2011, after the first hunger strike: “Prisoners are among the most exploited and repressed workers. As the global capitalist economic crisis worsens and jobs disappear, the jail and prison population inside the U.S. will swell with even larger numbers of desperate, oppressed workers. In the interest of building the broadest class solidarity, the progressive movement must support the demands and tactics of prisoners, who are an integral sector of the working class.”

WW’s slogan “Tear down the walls!” was the right one during the Attica rebellion, and it is the right slogan now — with “the new Jim Crow” mass incarceration, warehousing of the jobless, provision of cheap/slave labor for corporations and continuing abuse of prisoners.

We join Albert Woodfox’s call to “End solitary confinement in U.S. prisons!” and say: The prisons are the crime! Tear down the walls!