December 2, 2021, was the 46th anniversary of the end of the Laotian Civil War. Not only did the Royal Lao Government, in power from 1947 to 1975, fall that day, but also the Lao People’s Democratic Republic, a socialist nation with a Marxist-Leninist government, was established and remains in power to this day. 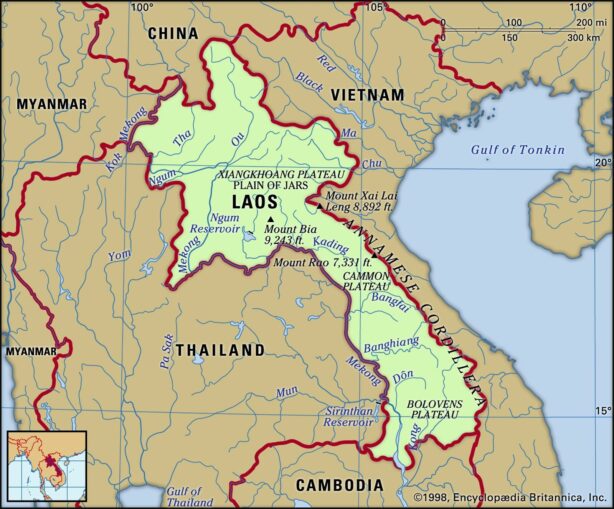 The revolutionary resistance was led by Pathet Lao (“Lao Nation”), also known as the Lao People’s Liberation Army. This was a Communist organization and movement that gained thousands of followers between 1950 and 1975, when Pathet Lao dissolved after their victory over the Lao monarchists.

Since 1975, Laos has been recovering and redeveloping from the wounds of the onslaught by U.S. imperialism; the effects of scorched-earth warfare are still felt. Despite this, Laos has not only prospered through revolutionary solidarity with neighboring socialist countries China and Vietnam, it has been defended by millions of Laotian people and the 300,000-strong Lao People’s Revolutionary Party.

One can ask: How has a nation that was practically pulverized by a nine-year bombing campaign — making it the most heavily-bombed place on Earth, with people today still dying in Laos from unexploded bombs dropped by the U.S. — managed to not only survive but continue to defend socialism and resist U.S. capitalism-imperialism?

While other socialist nations like China, DPRK and Cuba are often topics of discussion, Laos and Vietnam, among the socialist nations in the world, are not studied as thoroughly. Laos has a rich revolutionary history that demands careful attention and analysis, a history that exemplifies great resistance against the horrors of capitalism-imperialism, colonialism and monarchy.

‘A fundamental change in the destiny of our nation and society’

The 1975 victory did signal the end of the long feudal oppression of Laos. In Laos’ inaugural declaration of the National Congress of People’s Representatives, a passage reads “this victory signifies a fundamental change in the destiny of our nation and society.” (Revolution in Laos: Practice and Prospects, p. 9) A fundamental change indeed.

Laotian resistance, however, does not begin with Pathet Lao fighting the monarchy. Laos’ history of resistance against feudalism and other forms of oppression dates back over 600 years, beginning with the unification of the nation under King Tiao Fangum in 1353.

From this point on, the people of Laos fought feudal exploitation by Burmese and Siamese (Thai) landlords, along with two invasions by Burma in 1563 and 1569. Battles ensued over the centuries, all in an attempt to destabilize Laos and return it to feudal landlordism and later impose other forms of oppression and exploitation.

In the late 19th century, French colonialists invaded Laos and, from 1901 to 1937, an armed uprising was waged against both the French and Lao bourgeoisie by Ong Keo and Ong Kommandam, two Alak fighters and leaders of the Mon-Khmer tribe of south Laos, for independence from colonialism.

In 1917, the Bolshevik Revolution ushered in a new epoch of history in which communism was recognized as an attainable goal. This epoch inspired militant revolutionaries across Indochina, one of whom was Ho Chi Minh, a Vietnamese Communist. Ho Chi Minh would later lead Vietnam to revolution against U.S. imperialism; but in 1930 Ho Chi Minh was a traveler and journalist who founded the Indochinese Communist Party.

The ICP was to include Communists from Vietnam, Laos and Cambodia, and from here, the struggle for national democracy and socialism in Laos began to grow.

World War II ended with the crushing defeat of fascist Germany and Italy, as well as militarist Japan. This defeat was doled out not by the U.S., as is popularly told by reactionary history, but by the Soviet Union’s Red Army, and it sent shockwaves throughout the world, bringing tidal waves to the Global South, where struggles for national democracy and socialism were growing rapidly. U.S. imperialism responded by inciting the Cold War.

Laos was no exception. Its revolutionary forces developed for decades and, seizing the moment of heightened national liberation struggles of the 1940s and 1950s, mobilized the masses to overthrow the Japanese militarists, who had replaced French imperialism, establishing an independent Laos on Oct. 12, 1945.

Almost immediately, French colonizers reinvaded Laos, this time with the aid of the U.S. and Britain. The imperialists enlisted Lao mercenaries in larger towns to terrorize and crush national liberation rebellions. This resulted in a neocolonialist recapture of Laos in 1949. France then joined Laos with Vietnam and Kampuchea (also known as Cambodia) to form French Indochina, controlled by a puppet government ruled by France.

In 1950 Pathet Lao was formed out of a former anti-French nationalist movement known as Lao Issara by Prince Souphanouvong, who was, coincidentally, the half-brother of two of the former Prime Ministers of Laos during its French colonialist rule: Prince Phetsarath Ratanavongsa, the first Prime Minister of Laos; and Prince Souvanna Phouma.

Souphanouvong, although from the royal family and educated in France, came to know Ho Chi Minh while studying in Vietnam and became a communist. He petitioned the Viet Minh, a national liberation coalition in Vietnam, for aid in forming a guerilla force for the liberation of Laos.

Throughout the 1950s, Pathet Lao, supported by Vietnamese communists, began liberating large sections of Laos from colonialist rule. In 1954, at the same time Vietnam defeated the French at Dien Bien Phu, Laos liberated the province of Phongsaly and most of the province of Luang Prabang, breaching the front of the French colonizers stationed there.

At this point, France was forced to sign the Geneva Agreement, which recognized the sovereignty of Laos, Vietnam and Kampuchea. Under this agreement, Laos was deemed independent and controlled by a monarchy, fronted by Sisavang Vong.

Despite this agreement, Washington accelerated its push to conquer all Indochina, which lead to the U.S. war against Vietnam and to the “Secret Wars” that culminated in a campaign of terror against the people of Laos for 20 years.

The U.S. ‘Hidden War’ against Laos

While the U.S. openly propped up an illegitimate government in southern Vietnam and waged war with the National Liberation Front and northern Vietnam, they denied their invasion and occupation of Laos and suppressed news of it.

Laos borders Vietnam on the east and allowed the Vietnamese revolutionary government to use a system of roads inside Laos to ship soldiers and military equipment to southern Vietnam to fight the U.S. Known as the Ho Chi Minh Trail, this system totaled roughly 12,000 miles of roads that made it possible for more than 2 million liberation fighters to deploy to the south.

While the trail also ran partially through Cambodia, which was just as vital to the NLF fighters, the U.S. chose to focus its secret bombing campaign primarily on Laos.

In 2016 then-President Barack Obama pledged $90 million to help Laos find and disarm the millions of bombs left undetonated. Despite this, no U.S. president, including Obama, has bothered to apologize to Laos for the U.S. military’s crimes against humanity.

Communist victory and the rise of the LPDR

In April 1975 the NLF drove the U.S. out of Vietnam, crushing its puppet government in the south and establishing a socialist nation. This victory pushed the U.S. out of Vietnam, Laos and Cambodia. In December 1975, after months of Communist-led uprisings centered around the capital Vientiane, what little infrastructure of the Laotian monarchy remained fell apart completely, leading to a victory of Pathet Lao. Souphanouvong was named President, and Kaysone Phomvihane as Prime Minister.

At this point Pathet Lao reorganized itself and became the ruling party of Laos, the Lao People’s Revolutionary Party, which still governs the country today.

The Lao People’s Democratic Republic was proclaimed in December 1975 and immediately underwent a process of restructuring. Production and land were nationalized, and collectivization was implemented.

Restructuring was a challenge for Laos at first, partially because very little industry even existed in Laos that could be used as a base for productive forces, and partially because the ground was still saturated with undetonated bombs that made agriculture extremely dangerous (as of 2022, 30% of land in Laos still remains unsafe, which still obstructs economic expansion).

Despite these conditions, Laos has cut the poverty of its residents in half and nationalized health care and education. Laos’ smaller population means there is room for rapid expansion of hydroelectric facilities and dams, which provide clean, safe electricity.

Laos contains more hydropower potential than most countries and is projected to become a hydropower giant by 2025, being able to export up to 14,600 MW (megawatts) of power to neighboring countries, or 14.6 billion watts of electricity.

Over the last three decades, Laos has shifted away from agricultural collectivization into industrial work; rubber production is heavily centralized in Laos. Unlike in the U.S., where industrial workers are exploited for their labor often without union representation, the industrial workers of Laos are well-represented by unions and workers’ councils. With its nationalized health care, paid sick leave and pregnancy leave are mandatory and are ample in length and pay.

An April 27, 2020, Workers World article offered an early analysis of Laos’ incredible handling of COVID-19, with just 19 people in the entire country being infected and no deaths. Laos, upon seeing the spread of COVID-19 across the world, immediately put the entire country on a lockdown, closing schools and border checkpoints and freezing all travel to and from the country.

How is Laos faring almost two years later? According to the World Health Organization, significantly better than the U.S. Laos has unfortunately seen 553 deaths from COVID-19, with the total infection count being 135,000. The Laotian death rate from COVID is less than 3 % of the shockingly high death rate from COVID experienced in the U.S.

In Laos, market relations were, similar to China, expanded following the collapse of the USSR. This allowed a capitalist class to still exist in Laos, albeit small and heavily regulated and controlled by the government.

Laos has continued to prosper in its quest towards communism. They celebrate 46 years of socialist triumph and look forward to many, many more celebrations.

Workers World Party joins them in this celebration.