In the book “The Great Influenza: The Deadliest Pandemic in History” by John Barry, written in 2005 about the so-called Spanish Flu of 1918, we learn that pandemic actually started in the U.S. The army barracks in the Midwest were the breeding ground for the deadly virus. World War I soldiers packed into trains, and ships quickly spread the flu around the world. U.S. politicians hid the truth in order to protect the war profiteers; but Spain raised the alarm, and that’s how that pandemic was mislabeled. (tinyurl.com/a7p4bjs6) 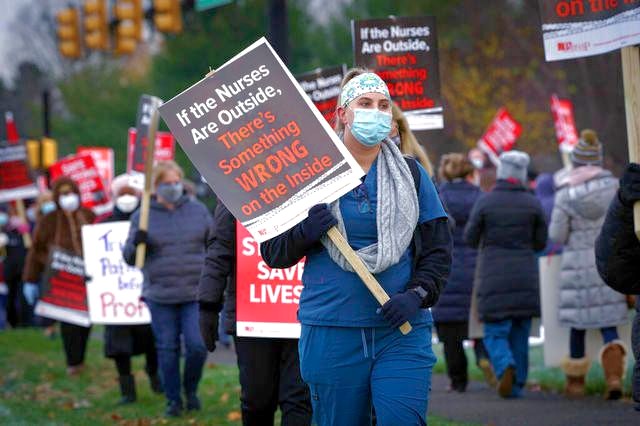 Nurses at Pennsylvania hospital strike over unsafe conditions in November 2020.

So far today close to 6 million people have died worldwide from COVID-19, with a disproportionate percentage being Black, Brown and Indigenous people, impacted by racial disparities endemic in health care.

In February 2021, Workers World managing editor Monica Moorehead wrote: “The need for reparations for equal health care for African Americans is being put on full, blatant display by the raging coronavirus pandemic. It is no secret that African Americans, along with other people of color, have been dying in hugely disproportionate numbers compared to white people. The killing discrepancy is especially acute in large cities like Detroit, Chicago, New York, Milwaukee and Los Angeles.

“According to Uché Blackstock, an emergency physician and founder and chief executive of Advancing Health Equity, and Oni Blackstock, a primary care and HIV physician and founder and executive director of Health Justice, African Americans are dying from the pandemic at the rate of 1 in 735 people, compared to whites at a rate of 1 in 1,030.” (workers.org/2021/02/54328)

The U.S. has the highest casualty rate in the world from COVID-19, yet Dr. Rochelle Walensky, head of the Centers for Disease Control and Prevention reassures us that the “good news” is that only disabled, immunocompromised and elderly people are dying. Is the CDC implying they are expendable? This is another demonstration of a top official exposing the callous nature of our government under capitalism.

The labeling of COVID-19 as the China or Wuhan virus by the ruling class, specifically the former president, unleashed anti-Asian sentiment and attacks. San Francisco reported 60 victims of anti-Asian hate crimes in 2021, up from just nine in 2020. Ahn Le, a Vietnamese victim of an attack, is suing the San Francisco District Attorney for refusing to file hate crime charges. (tinyurl.com/ycy2trtx)

When the pandemic began, the government’s response was denial, and that spawned the far-right anti-vaccination movement. The country still struggles against far-right misinformation and propaganda that hinders containment of the virus and divides our class.

Now hazard pay, paid leave and sick time, rent moratoriums for essential workers like grocery clerks, teachers and delivery drivers are curtailed or gone. We need a strong labor movement to push for these measures to be reinstated. Government agencies like the CDC and Occupational Safety and Health Administration lost credibility when they cut corners on safety guidelines to protect corporations’ profit margins.

Forced to choose between health or income

Workers were told to “work sick” or risk losing their jobs and becoming another member of our class forced into poverty by the societal elite that prioritizes a healthy economy over a healthy worker. Teachers’ unions, for example in Chicago, have staged protests and sick-outs to demand better protective measures to allow safe in-person learning or a return to remote classes. Chicago Mayor Lori Lightfoot, in tense bargaining sessions with the Chicago Teachers Union, threatened to penalize any absent teacher before reaching a compromise.

Prison release measures that were promised failed to materialize. The incarcerated have suffered gross medical neglect and the torture of constant lockdowns, in addition to the already brutal treatment within the carceral state including medical experimentation without consent.

Four men incarcerated in Arkansas were given ivermectin to treat COVID-19 without their consent. Ivermectin is a drug for treating parasitic infections and is not sanctioned by the Food and Drug Administration as an effective treatment for COVID-19. The men suffered serious gastrointestinal side effects from the drug and have filed a lawsuit against the sheriff, medical provider and the prison.

For-profit pharmaceutical companies in the West hampered the worldwide distribution of lifesaving vaccines, citing patent rights that prohibited other countries from manufacturing their own supplies. Meanwhile Cuba and China continue to aid poorer areas around the globe, sending medical teams and supplies.

Cuba has vaccinated 90% of their population and has plans to distribute 200 million doses of vaccine to poorer countries, despite living under severe U.S.-imposed economic sanctions. Both Cuba and China have the socioeconomic structures in place that allow their governments and populations to cooperate in mitigating the spread of the virus.

In contrast the fragmented underfunded public health services in the U.S. have been exposed to be almost nonexistent — never establishing a proper contact-tracing system and mishandling the vaccine rollout to the point of being a debacle. There needs to be an overthrow of the health care insurance industry and the establishment of universal free health care for all, guaranteeing health as a human right.

Hospitals must adequately staff workers caring for the sick, so those workers can give the best possible care without the strain of working beyond their physical, emotional and mental capacity. Nurses’ unions have been the most militant advocates for safer conditions for their patients and for universal health care.

Health care workers unions like National Nurses United are organizing thousands of health care workers to challenge these attempts by the ruling class to oppress us. Nurses across the country held a day of action Jan. 13 to shine a spotlight on the dire conditions they are working under in U.S. hospitals and laying the blame on health care and pharmaceutical profiteers. These profiteers are giving millions to groups lobbying elected officials to vote down any legislation that would guarantee health care for all, something the majority of their constituents support.

The COVID-19 pandemic will end, and hindsight will allow a detailed view of the lasting effects and how society was changed. Undoubtedly we are both individually and collectively wounded by our experience, and we need healing.

However, now is the time to be active in campaigns against for-profit health care and to advocate for nurses in their fight for safe patient-to-nurse staffing ratios.

Nursing is still a predominantly female profession. Nurses experience misogyny and the oppression of patriarchy in the workplace. They combat stereotypes that depict them as the helpmates of male doctors having no voice. The truth — and the pandemic proved this to anyone with eyes to see — is that nurses are the essential workers there 24/7 when you are sick or dying.

Only dire circumstances force a nurse to leave the bedside to walk a picket line, yet that is where we are today. Like the sign on the picket line says “if we are out here, something is very wrong in there.” We should be supporting nurses and engaging them in our battle against capitalism and imperialism. They are the most trusted profession and can be powerful allies in building a workers’ world.

Marie Kelly is a Registered Nurse and an at-large member of National Nurses United.