This lightly edited article, based on an interview with Workers World Managing Editor Martha Grevatt, was published Feb. 2 in the Danish Communist Party’s newspaper, “Worker.” 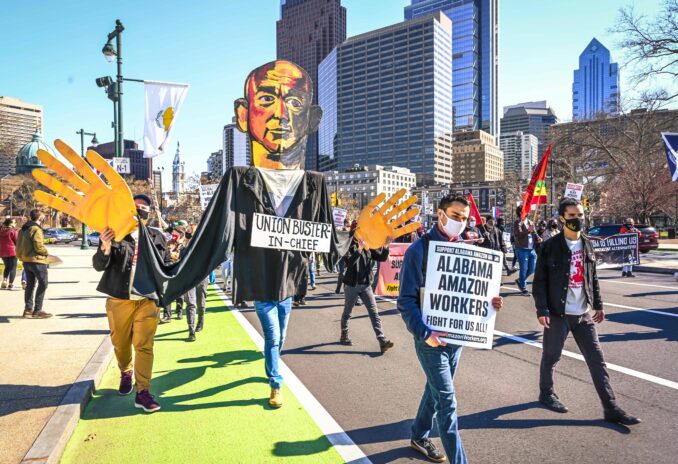 In March 2021, protesters took to the streets in 50 cities across the U.S. to support workers in the state of Alabama who were trying to form the U.S.’ first union for Amazon employees. WW Photo: Joe Piette

With renewed determination, workers in the U.S. are staging strikes, forming unions or quitting their jobs in protest of underpayment and poor working conditions across the country.

Martha Grevatt, a managing editor of the U.S. newspaper Workers World and a retired board member of United Auto Workers Local 869, says the embattled workers’ movement is worrying the country’s employers.

“We are seeing a sharpening of the class struggle in the U.S.,” she tells Workers Weekly.

When October turned into Striketober

Grevatt says October 2021 was nicknamed “Striketober” as the month saw everything from nurses, factory workers and supermarket workers stage strikes across the U.S.

When agricultural machinery company John Deere tried to implement a new collective bargaining agreement with the UAW, 10,000 workers staged a strike for higher wages and pensions. The strike spread to 14 of the company’s workplaces in six states.

“The workers feel they won. They didn’t get everything they fought for, but they didn’t lose anything, and they got higher wage increases than the company had initially offered,” says Martha Grevatt.

According to Martha Grevatt, the nurses’ historic strike forced the private hospital to end understaffing for the benefit of both nurses and patients.

She sees the strike movement continuing in the U.S., where more than 8,000 workers at retail chain King Soopers walked off the job at 77 sites on Jan. 12, leading to empty supermarket shelves.

As the strike movement spreads across the U.S., monopoly companies like Amazon and Starbucks are seeing their workers organize for better pay and working conditions.

After baristas at a Buffalo coffee shop formed the first U.S. union for Starbucks workers on Dec. 9, a wave of union petitions from their colleagues has poured in to the U.S. National Labor Relations Board.

On Jan. 10 the new union, Starbucks Workers United, announced that workers at another Buffalo coffee shop had won the vote to unionize, despite Starbucks’ persistent attempts to defeat the initiative.

Starbucks has thus failed to prevent workers from forming and joining the union, even though the company has spied on its employees and shut down entire cafes in order to defeat the workers’ movement.

According to British daily The Guardian, tech giant Amazon is also facing challenges in its attempt to stop union activity. Indeed, the U.S. National Labor Relations Board has ruled that Amazon violated Alabama labor laws, when employees tried to form the first union for Amazon workers in April 2021.

Partly because Amazon installed a mailbox at the workplace that gave the impression that it was Amazon itself organizing the union ballot, the election results have been declared invalid. Amazon workers now have the opportunity to form the union in a new vote this month.

“Employers are very concerned. You can see the extensive media coverage given to the union fight at Amazon and Starbucks. It was a front-page story on the bourgeois mouthpiece New York Times when just 21 workers at one Starbucks coffee shop in Buffalo, New York, won the election to be represented by a union,” says Grevatt.

“Bosses won’t put their profits at risk by even a penny. They don’t want to be forced to negotiate a collective bargaining agreement with workers, which could give employees better pay and benefits, as well as grievance procedures. They want to run their business with an iron fist,” she adds.

To protest underpayment and poor working conditions, many workers in the U.S. have chosen to quit their jobs, like Beth McGrath who filmed herself quitting her job over the loudspeakers of the Walmart store she worked for:

“My name is Beth from the electronics department. I’ve worked for Walmart for almost five years, and I can tell you that everyone here is overworked and underpaid,” Beth said over the loudspeakers so all the customers could hear her resignation.

In the U.S., for example, companies have been trying to find workers through outlandish job advertisements, such as retailer Fred Meyers, which requires candidates to be willing to cross a picket line.

“At this point, the working class is feeling its impact and knows that the strike weapon can affect capitalist production and its supply chain, which has also been affected by COVID-19,” Grevatt tells the Worker.

That the U.S. labor movement is gaining momentum is because the country’s workers have a new perception of their material conditions, after unions have been “under siege” for over 40 years since then-U.S. President Ronald Reagan intervened in strikes and destroyed unions.

“This relentless assault has driven union membership down to just 10% of the workforce nationwide. This now means that the younger generation of the working class has lower wages and often no health insurance when they retire,” Martha explains and continues:

“All this happened even before COVID-19 hit. Now the pandemic has exposed the truth about the profit-seeking health care system and the capitalist system as a whole. Workers are not willing to risk their lives to increase the profits of a few. That’s why low-wage, overworked employees of big companies like Starbucks and Amazon are fighting to be represented by a union.”

According to Grevatt, workers inside and outside the U.S. must also try to forge ties with each other to prepare for the “final battle” against capitalism.

“The working class cannot defeat capital by fighting it separately in each workplace or even in each country. We need a global classwide movement based on solidarity between workers and oppressed people everywhere,” concludes Grevatt.