The right to access safe, legal abortions is in grave danger. On the 49th anniversary of the U.S. Supreme Court’s ruling allowing access to the procedure in the case of Roe v. Wade, on Jan. 22, 1973, this fundamental human right is being challenged as never before. This landmark ruling, the result of a strong, arduous mass movement, may be overturned by the top court in late spring. 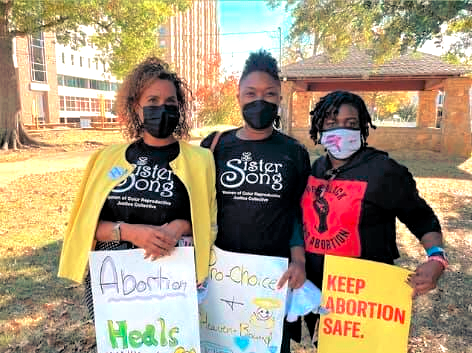 Demonstrators in Jackson, Mississippi on Dec. 1, 2021, call for the Supreme Court to maintain the right to access legal abortions.

Reactionary forces in the U.S. have schemed to overturn the right to legal abortion since the day SCOTUS first issued the decision. In state legislatures and courts and by extralegal violence, the right wing has actively sought to end this essential part of comprehensive health care. It flies in the face of the rights everyone should have — both to bodily autonomy and to make their own medical decisions free of obstacles, coercion or punishment.

SCOTUS was packed with ultraright justices by former President Donald Trump, acting on behalf of ruling-class conservatives. The right wingers on the high court have given every indication that their goal is to overturn the precedent-setting Roe decision and create what is termed a “post-Roe U.S.”

This would send pregnant people seeking to end unintended pregnancies back to dangerous back-alley and self-abortions. It would be a huge medical and legal setback for millions of people and create more difficulties especially for women with low incomes, Black, Latinx, Indigenous, im/migrants, disabled people, rural residents, and individuals with various gender identities who can become pregnant.

Overturning legal abortions would engender more desperation, oppression and repression. Several states plan to follow the Texas law’s example, while 26 states are ready to ban abortions if Roe is nullified. This entire anti-abortion campaign in the states and on the federal level, up to and including the conservatives on the top court, reeks of misogyny and white supremacy.

This assault is part of the ruling-class offensive against the voting rights of Black and other people of color. It is demonstrated in other aggressive legislation and SCOTUS rulings hostile to people of color, im/migrants, workers, labor unions and LGBTQ2S+ individuals, while upholding the rights of corporations, banks and the superwealthy.

The near-total abortion ban, S.B. 8, implemented in Texas Sept. 1 with no exceptions for rape or incest victims/survivors — even children, has sent hundreds if not thousands across borders to access safe abortions. Allies, including pro-choice organizations and donors, are helping them do so. Networks have sprung up in Texas and around the South. Those with money are traveling to the East and West coasts.

On Dec. 1, the Dobbs v. Jackson Womens’ Health Organization case was argued before SCOTUS. Here, the state of Mississippi seeks not only to impose a 15-week ban on abortions, but is asking the top court to throw out the Roe decision and ban abortions altogether.

The top court has supported the Texas six-week abortion ban and its extralegal vigilante bounty scheme aimed at those who “aid or abet” abortion seekers against the several legal challenges by reproductive health clinics. On Jan. 20, six conservative justices referred the clinic operators’ case back to the notoriously reactionary Fifth Circuit Court of Appeals and not to the pro-choice Federal Judge Robert Pitman.

Activists have demonstrated outside of SCOTUS and in Austin, Texas; Jackson, Mississippi; and around the country demanding that legal abortion remain in place, a view shared by the majority of U.S. residents. It is a human right and a medical necessity.

The Women and Gender Oppressed Caucus of Workers World Party has issued a statement and 10-point program explaining reproductive justice, and why the fight for it must be aimed at capitalism by an independent movement, free of politicians. (tinyurl.com/yck4ts6d)