Jan. 25 — We are beginning Year Three of the COVID-19 pandemic. As of this writing, almost 900,000 people have died in the U.S., and over 7 million people have been infected. (worldometer.com)

These figures, based on official reporting data, are almost surely an undercount. There will have been cases unreported in the most vulnerable populations and deaths from illness and conditions left untreated because of the crisis.

Cases are still mounting. Soon a million people will be officially dead in the U.S. In Onondaga County, New York — where I live most of the year — the number of people in intensive care with the virus during the Jan. 18 week was the highest since a year ago; about half of these had been vaccinated. For the first 18 days of the month, the county confirmed 23,839 cases, nearly four times as many COVID-19 cases as in the same 2021 time period.

In TV late night chatter, “Things are getting better” or in my local newspaper: “Schools closed for in-person learning will reopen.” The message is “Business as usual.” The unspoken message about the pandemic is “Let it rip!”

President Joe Biden’s touted offer of free test kits, “four per household,” has no relation to reality. What about people who are houseless or in the process of being evicted since pandemic eviction protections are gone? How long will four tests last in a family with more than four people or more than four jobs to stay safe in coming and going?

Any motion to stop — or even slow down — COVID-19 in the U.S. has been blocked by powerful forces at the state and national levels — forces that take no responsibility for how people are struggling just to stay alive.

Why does the U.S. lead the world in COVID-19 deaths?

The U.S. so-called “democracy” is built on the capitalist system. That system is based on the principle: “Make profits, and to hell with the people.”

The main sacrifice on the altar of profit? The workers who create the wealth accumulated by drug companies like Pfizer, investment funds like BlackRock, lords of distribution like Jeff Bezos of Amazon.

The U.S. funds an imperialist top-to-bottom, international to small-town military system with trillions of dollars. But the U.S. has no top-to-bottom comprehensive health care for the people — only a system that guarantees profit for corporate “health care” companies.

With the pandemic entry into this chaotic system, workplaces became a shambles of illness and death, especially health care facilities and nursing homes. Everywhere, the most vulnerable people were the most at risk — people of color, poor people, disabled people — the higher percentage of those dying confirms this dire fact.

When the pandemic began, workers did not wait for corporate management or the then-Trump administration to keep them safe. Instead, workers took matters into their own hands and rose up to fight for safe working conditions at their jobs.

A few of many examples from only one month: In March 2020, Detroit, Michigan, and Birmingham, Alabama, bus drivers went on strike for safety issues like masks and cleaning buses. Workers at the Purdue poultry processing plant in Kathleen, Georgia, struck over working conditions and hazard pay. McDonald’s workers in San Jose, California, struck because management did not stock soap for them to wash their hands. General Electric workers in Massachusetts walked off the job demanding its factories retool to make direly needed ventilators.

Walkouts and strikes against pandemic work and living circumstances continued and accelerated. Besides workplace actions, there have been rent strikes, tuition strikes, strikes by prisoners about health and work conditions. On International Workers Day, May 1, 2020, essential workers at Amazon, Instacart, Target, Walmart and Whole Foods held a national strike over lack of safety precautions, hazard pay and benefits.

And of course there have been thousands of actions by gym workers, spa workers, health care workers, nurses and doctors — many unrecorded.

These actions coincided in May 2020 with the murder of George Floyd Jr., an African American man, by Minneapolis police. Within a week, protests led by Black Lives Matter surged throughout the U.S. Workers and oppressed people of all nationalities and genders joined together in protesting against racism. The turnout was estimated to be as many as 26 million people, making the protests the largest demonstration of anti-racist solidarity in U.S. history. (New York Times, July 30, 2020) 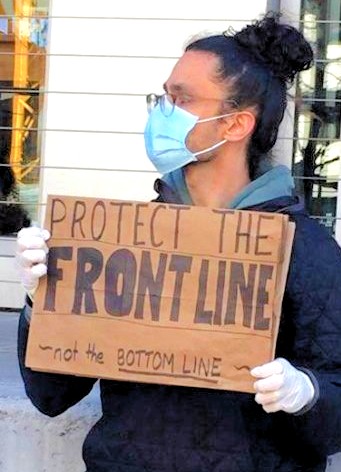 With this surge of solidarity, workers and oppressed people continued to lead the way during the pandemic. Job place actions became Striketember, then Striketober, then new strikes and actions somewhere in the U.S. almost every day in every month.

Rank-and-file workers in traditional unions are demanding more aggressive organizing. Low-wage, short-term workers are on the march, led by a new generation who say in tweets: “I’m making $7 an hour with no health care. I have nothing to lose!” As the Communist Manifesto says: “You have nothing to lose but your chains!”

Workers are turning to each other for support and to fight the exploitative system that dominates life in the U.S. They are fighting for the right to health and safety — at work and throughout their lives.

And this moment is not simply about “defeating COVID-19.” This is a turning-point moment when the health crisis has ripped away capitalist camouflage and exposed this system is not “the best.” In fact, weighed on the scales of health, the U.S. capitalist system is “the worst.”

Now is the time to fight immediately, for conditions where workers and oppressed people have health care as a human right, have jobs under safe working conditions, can stay home with their children with full pay if they need to, can have a job they can come back to safely when they are ready.

Toward a socialist future

And we need more! We need to deepen political solidarity with and among workers to widen our view of what is possible in the future. We can bring forward the truth that supporting the most oppressed among us strengthens all of us and gives a wider view of what we can win. We can affirm that solidarity between workers is won by working-class actions, by fighting racism, anti-woman, anti-LGBTQ2S+ bigotry, and bias against disabled people.

The ruling class has revealed itself incapable of dealing with the pandemic crisis. We, as working-class and oppressed people, have seized the day and are organizing to meet our needs. With a continuing mass surge of solidarity — no matter what happens with any election — it is possible to win our demand: “People before profits; health care is a right!”

And we can use this moment to push further, to make demands that may seem distant now. In the struggle for those goals, cracks open in the capitalist system, and we can make a way through, toward a better, socialist future.

Workers World/Mundo Obrero has featured hundreds of articles on worker resistance since the beginning of the pandemic. Access by searching COVID-19 at workers.org.