Pickets were called off at 6 a.m. Jan. 20, as United Food and Commercial Workers Local 7 reached a tentative three-year contract agreement with King Soopers grocery chain after a 10-day strike.

The new contract benefits 8,000 workers in 78 stores in Colorado. King Soopers is a subsidiary of the enormous Kroger food corporation. 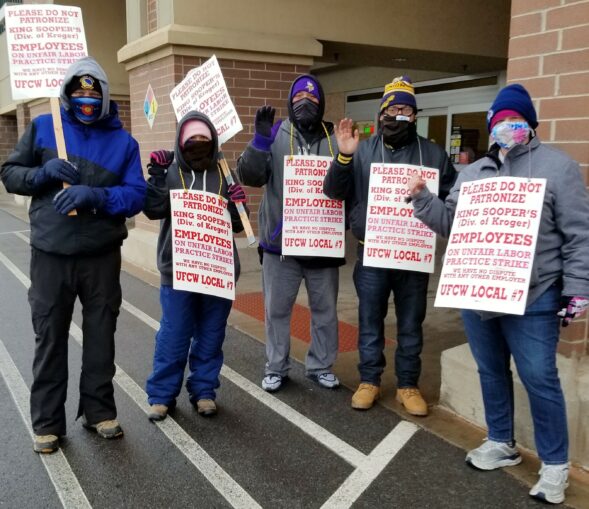 According to the settlement, most workers will receive a wage increase of at least $2 an hour, with some positions increasing more than $5 an hour. Ramped-up safety measures will be put in place to protect the workers from violence by customers, as well from dangers of COVID-19 infection.

King Soopers has agreed to add 500 new full-time workers within the first 90 days of the contract and create a faster path for part-time workers to move to full-time. This will address the key issue of job outsourcing. The company will pay a larger share of worker health care costs as well.

The company paid workers $2 an hour in pandemic hazard pay for only 2 months, while making $4 billion in profits in 2021.

The huge gap between company riches and underpaid labor was not lost on essential workers trying to survive on low wages art-time hours. Many are food insecure, and 14% have been homeless during 2021, according to a study of 10,000 Kroger workers in Colorado, California and Washington. (In These Times, Jan. 11)

Chances for a successful strike increased every day, as community members brought food and money and joined the picket line in the freezing snow. To show love and support for the workers, the community did not cross the picket line and did not shop in the King Sooper, where stores were empty of people!

Outrage grew when the corporation placed hundreds of TV ads using company management as “actors” praising the corporation. With workers walking the picket line in extreme cold, people were repulsed by the ads.

King Soopers went to court Jan. 19 and received a restraining order to limit the number of picketers to 10 at any store, restricting the right to speech of picketers. Yet neighbors kept joining the line! At this writer’s local store, there were at least 30 strikers on the line, with police looking on but not stopping their march.

“Strikes absolutely work,” said UFCW Local 7 leader Kim Cordova. “It shows the company they can’t run without the workers. The real power is with the people. We hope we set the bar so other workers follow suit; and so that when enough is enough, they take a stand.” (Denver Post, Jan. 25)