Members of the largest nurses’ union, National Nurses United (NNU), as well as RNs from other unions, organized A Day of Action to Protect Nurses in 11 states across the country Jan. 13. The day, which began with a virtual press conference, ended with a candlelight vigil in front of the White House in memory of the 481 RNs and thousands of health care workers who have died from COVID-19 in the U.S. 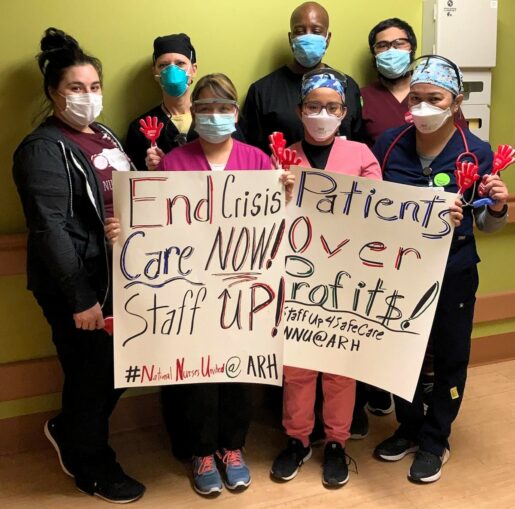 The day supported demands the NNU is making of the Biden administration. These include a permanent Occupational Safety and Health Administration COVID-19 health care standard, continued enforcement of the Emergency Temporary Standard, until a permanent standard is issued, and strengthened Centers for Disease Control and Prevention guidelines based on science — not on what’s good for business profits.

The nurses’ testimony — urgent and at times emotional — shared a common fact: Profit-driven health care corporations have dictated the catastrophic U.S. response to the pandemic.

As the omicron variant decimates the medical system’s ability to control the pandemic death toll in the U.S., the federal government has blatantly put its priority instead on saving corporate profits.The latest examples have been the easing of CDC quarantine timelines, the lapse of OSHA’s emergency temporary standard for hospital workers and the Supreme Court ruling against vaccine mandates in the private sector.

Member of NNU’s Council of Presidents, Zenei Triunfo-Cortez, RN, spoke of the moral injury and trauma which nurses are experiencing. Nurses who have contracted the virus feel betrayed by employers and government agencies, who called them heroes at the beginning of the pandemic yet now force them back to work while ill or before they are sufficiently recovered.

Triunfo-Cortez said: “Our employers claim there is a ‘nursing shortage,’ and that’s why they must flout optimal isolation times. But we know there are plenty of registered nurses in this country. There is only a shortage of nurses willing to work in the unsafe conditions created by hospital employers and this government’s refusal to impose lifesaving standards.”

Other speakers in the Bronx stressed that indigent and poor people are disproportionately vulnerable, because the U.S. has failed to adopt a universal single-payer health care system. Public hospitals in cities and rural areas do not have the resources that for-profit hospitals have. Small rural hospitals are not able to pay the high rates of “traveling nurses,” who make up for staffing shortages.

In Pennsylvania, the Temple University Medical Center nurses, represented by the Pennsylvania Association of Staff Nurses and Allied Professionals, also  livestreamed a press conference. Temple, in line with new lax CDC guidelines, expects nurses to return to work five days after being sick with COVID-19 — even if they are still symptomatic. As one Temple RN put it, the forced staffing of hospital workers is putting everyone in danger.

Chicago nurses spoke out about the rapidly deteriorating conditions inside hospitals in that city during their livestreamed press conference. Scott Mechanic, RN, an emergency room nurse at the University of Chicago Medical Center, exposed corporate health care failure to improve conditions: “We don’t have food-service people. We don’t have supply-chain people to deliver our most critical supplies. We don’t have people to repair our equipment. But every job that doesn’t get done by somebody else, ends up falling to the bedside nurse. We’re overwhelmed.”

At the conclusion of the NNU virtual press conference, Bonnie Castillo, RN, Executive Director of NNU, called on hospitals and federal, state and local government agencies to provide protections based on science, not on business models constructed to yield profits. She called on the public to follow multiple measures to stem the tide of transmission, including vaccinations and masking. She emphasized that the day has come when there may not be a nurse available to adequately care for a sick and suffering person or loved one, because health care workers are falling ill and hospitals are not staffing adequately.

The United States has the highest death toll from COVID-19 in the world. The government, governed by capitalist principles, has permitted this catastrophe. The failure to protect all the country’s population during this pandemic is due to a deteriorating, discriminatory for-profit health care system that has neither the resources, structure nor principles necessary to guarantee quality health care for all.

Nurses understand this failure and will continue to fight for the fundamental right to health care.

Marie Kelly, an RN with 45 years experience, is an at-large member of National Nurses United.