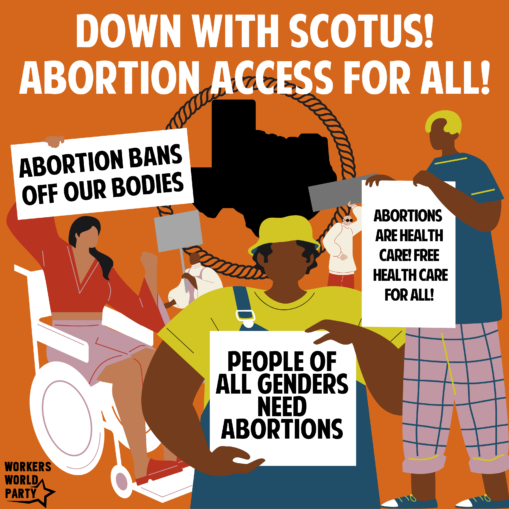 The Women and Oppressed Gender Caucus of Workers World Party issued the following statement and program on the 49th anniversary of the Roe v. Wade decision. Email the caucus at [email protected]

As a result of a hard-fought mass movement, the U.S. Supreme Court issued the landmark ruling in Roe v. Wade on Jan. 22, 1973, legalizing the right to access safe, legal abortions. Now this right is severely endangered by the ultraright seeking to overturn it. Already, Texas implemented a near ban on abortion with no exceptions for rape or incest victims, even children. Other states seek to copy this law, and 22 are set to overturn legal abortion if Roe is overturned.

It is women and gender-oppressed people, Black, Latinx, Indigenous, im/migrants, low-income, young, rural and disabled, who are most affected by this ban and states’ obstacles to legal abortions. The rights to bodily autonomy and to make one’s own medical decisions are basic human rights.

These right-wing attacks imposed by courts, legislatures and even extralegal violence against clinics and staff are part of an entire reactionary agenda to overturn rights and gains made by mass movements of people of color, women, workers, LGBTQ2S+ and disabled people over decades.

The struggle to preserve legal abortions is but one part of the overall fight for reproductive justice, which maintains that people should make decisions about their lives without state repression or employer discrimination. It means freedom from racism, sexism, homophobia, transphobia, ableism and anti-worker and anti-im/migrant ideas and policies. But these reactionary ideologies are embedded within the capitalist system and promoted by the capitalist class to divide the workers.

It is crucial that the struggle for reproductive justice be aimed at the capitalist system, the root cause of all oppressions, exploitation and inequality. It is the bosses who deny workers COVID–19 sick days and sick pay. It is the capitalist class which opposes workers’ rights to safe working conditions and to organize, including at Amazon.

The corporate bosses’ aim is to keep their megaprofits rolling in, no matter whom they exploit or repress or how badly they destroy the planet. The superrich fear that the multinational, multigender working class and their allies will organize and mount an independent, united struggle — not relying on the Democratic Party — which will ultimately aim at capitalism itself. But this is exactly what is needed to win reproductive justice and a lot more. In fact, getting rid of capitalism altogether and fighting for a socialist system is the way to win permanent reproductive justice.