In the struggle over public schools, the question is what will win out — churning out workers for the profit system or safety for the people? 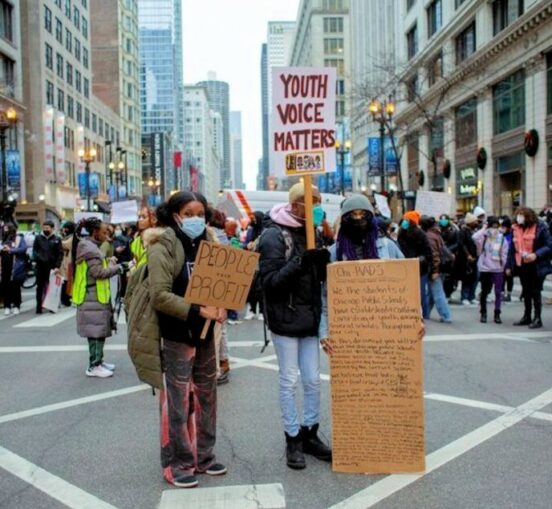 On the West Coast, angered by the Oakland Unified School District’s inability to tackle the rapidly spreading COVID-19 crisis in the city’s public schools, teachers and students have conducted well-attended protests. Students organized a sick-out on Jan. 13; teachers held a similar protest Jan. 7. Both protests effectively shut down classes in 10-12 schools, while other schools had very low student attendance. Students have announced a student strike for Jan. 18. Teachers in many Oakland schools will hold a sick-out in support of the strike.

According to rank-and-file teachers, OUSD has been dragging its feet on providing basic safety measures and personal protective equipment, such as KN95 masks, since the fall 2021 surge in pandemic infections. The Safety Bargaining Team of the Oakland Education Association has made repeated attempts to sit down with OUSD to bargain for these measures. When OUSD failed to respond, the team disbanded in protest.

Rank-and-file teachers and students, particularly in the secondary schools, then stepped up to organize sick-outs and other protests.

A petition signed by more than 1,200 Oakland students vehemently protested the increased COVID-19 cases at school, lack of access to the recommended N95 masks, no designated space for people to eat safely, no access to weekly testing and no safe-seating arrangement of classroom desks. Protesting students gave the district a week to remedy these serious safety violations.

In response, OUSD unevenly rolled out KN95 masks at some schools and set up a few outdoor spaces where students can eat. However, OUSD is refusing to consider weekly access to testing at its schools. There is no social distancing in most classrooms.

Many rank-and-file teachers and students are pushing for a return to distance learning, at least until the omicron variant surge diminishes in Oakland. The infection rate in Oakland, particularly in the west and east areas of the city, has outpaced that in other areas of Alameda County.

By the weekend of Jan. 15, OUSD and OEA had reached a tentative agreement about some of the safety measures. It remains to be seen if this agreement will be approved by the OEA Representative Council or supported by students planning the Jan. 18 strike.

In recent weeks, teachers and student-workers at universities have won big victories for better wages and safer workplaces. On the East Coast after 10 weeks on a dynamic picket line, the 3,000 members of Student Workers of Columbia-United Auto Workers Local 2110 claimed victory against elite education behemoth Columbia University. On the West Coast, the 17,000 members of Student Researchers United-UAW won union recognition across the entire University of California system. (Workers World, Jan. 12) 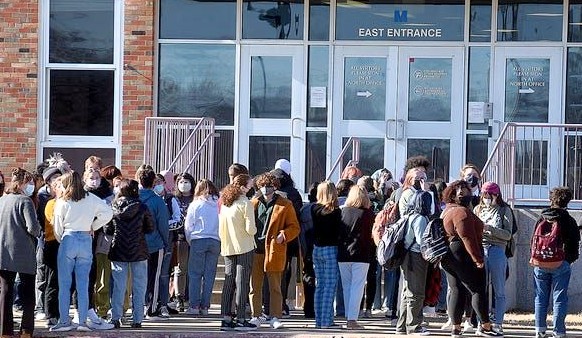 In secondary education, members of the tightly organized and militant Chicago Teachers Union walked out for a week over unsafe conditions for teachers and students due to the pandemic, facing down the city’s hostile mayor, Lori Lightfoot. (“Profit plague feeds omicron surge,” Workers World, Jan. 13)

Prioritizing people’s lives over money, Chi-RADS participants write that they “believe in the re-imagination of our education” and want to ensure that “is not just the condition of what learning should look like in the eyes of American capitalists.” (Full statement and demands at tinyurl.com/yckvefht and tinyurl.com/2p9fkc3j.)

Demands include centering marginalized students in all discussions related to COVID-19 safety plans, a public apology of city officials for negative statements about the Chicago Teachers Union, COVID-19 relief stipends, funding of mutual aid projects, ensuring one full-time therapist for every 30 students and implementation of basic safety measures including N95 masks, rapid antigen tests and an efficient contact-tracing system.

Chicago students joined a week of countrywide protests Jan. 14. Marching through the streets toward the CPS administrative offices, students yelled: “Si se puede,”
“Yes, we can” and “No more oppression, change is now in session!” (tinyurl.com/yckpzdan)

Thousands of students from more than 20 schools in New York City walked out of class Jan. 11 to protest COVID–19 surge conditions and demand a temporary school shutdown with an online option. A viral video showed hundreds streaming out of Brooklyn Technical High School, a large and prestigious public school.

In Boston, more than 7,500 people signed a petition calling for remote learning options and more safety protocols. Hundreds of students at public schools walked out Jan. 14 in a protest organized by the Boston Student Advisory Council. 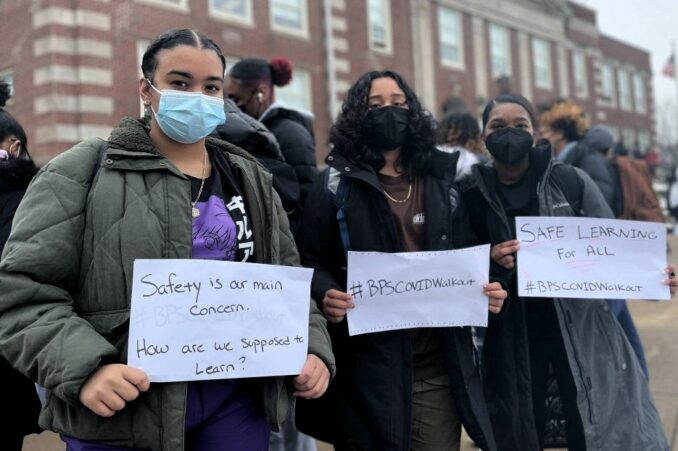 At a Jan. 14 walkout to protest the Boston Public School administration’s failure to deal with the pandemic’s impact, New Mission High School students chanted: “No teachers, no plan. We’ve got to take a stand!”

More student walkouts and protests have been reported during the week of Jan. 10, including in Washington state, Wisconsin, Missouri, Maryland and elsewhere.

Judy Greenspan is an Oakland teacher, an active member of the Oakland Education Association and chair of the OEA Substitute Teacher Caucus. Minnie Bruce Pratt was an adjunct and short-term contract teacher at the university level for 45 years.