Monteria Robinson’s life changed Aug. 5, 2016. That day a 16-person police force from multiple agencies under the direction of the U.S. Marshals Service fired 110 rounds into the apartment of her son’s, Jamarion Robinson’s, partner in an attempt to serve a warrant on the 26-year-old Black man. 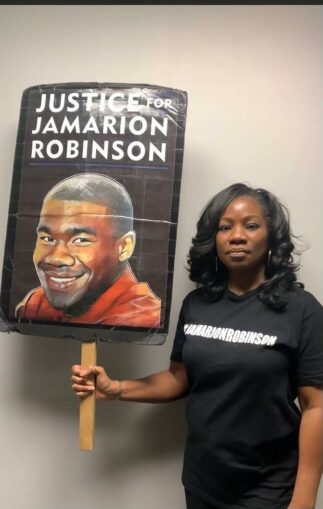 At the time, federal agents were not allowed to wear body cameras nor were local police from Atlanta and East Point, Ga., and Fulton, Fayette and Clayton Counties, who participated in the assault. However, a neighbor started filming once the gunfire began and recorded almost three minutes of continuous police shooting.

After the cops killed him, Robinson, with 76 bullet wounds, was handcuffed and dragged down the stairs to the ground-floor living room, where a flash bang grenade was set off, burning him.

Police claimed that Robinson fired at them first, but the only gun that was found in the apartment was inoperable, and Robinson’s fingerprints were not on it. Of the multiple bullet wounds on his body, there were massive entry injuries on the palms of his hands, indicating his hands were up when he was shot.

Much of this information only came to light because of the independent investigation Monteria Robinson launched into the murder of her son. At the time the Marshals Service refused to permit their agents to be questioned or allow any documents to be turned over to the Fulton County district attorney.

However, after years of rallies, protests, press conferences, media interviews and civil lawsuits that kept the case in the public eye, the current Fulton County District Attorney, Fani Willis, convened a grand jury Oct. 27 and 28. At the conclusion of testimony, two officers, Eric A. Heinze with the Marshals Service and Kristopher L. Hutchens, a Clayton County police officer assigned to the Marshals Service were indicted. The eight counts include felony murder, aggravated assault, burglary, making false statements and violation of oath by a public officer.

Monteria Robinson delivered the news to a group of dedicated supporters who had rallied for hours both days in front of the Fulton County Courthouse, chanting Robinson’s name, distributing flyers and repeating the details of his death while the grand jury met.

While the indictments brought shouts of joy and tears of relief that some measure of justice had been won, Jamarion Robinson’s mother made clear this was just a first step. Only two members of the “death squad”’ were charged, and there is a trial and possible conviction yet to take place. Beyond that, she noted, are the many other families whose members have died in equally suspicious police killings in metro Atlanta and around the country.

As of this writing, the two indicted officers have not turned themselves in. They were granted seven days to get their affairs in order, and their bond has already been determined. Both have retained high-priced lawyers, who have already submitted a motion to move the case to federal court where they will argue that as federal agents, Heine and Hutchins are immune from state prosecution.