The Central American country of Nicaragua will hold national elections Nov. 7. Already the U.S. bourgeois press, a mouthpiece for U.S. imperialism, has declared that the elections will be “unfair and undemocratic.” For example, the New York Times ran an article Oct. 7, entitled “Democracy, or Something Like It,” in which the first four paragraphs label democracy in Nicaragua as being a “facade.” 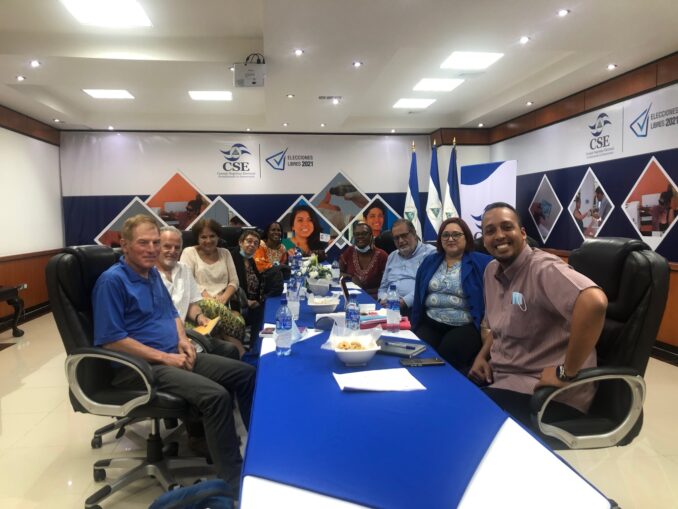 U.S. delegation meets Oct. 4 in Managua with Brenda Rocha and Cairo Amador, the president and vice president of the Supreme Electoral Council, seated second and third on right-hand side. Seated in front of them is Michael Campbell from the Nicaraguan Ministry on International Relations and the Caribbean.

The article also holds Daniel Ortega, the current president of Nicaragua, responsible for disappearing or detaining any opposition candidates who are neither allies nor friends of the Sandinista government. The Sandinista National Liberation Front (FSLN) was victorious in carrying out a grassroots revolution in 1979 against the U.S.-backed fascistic Somoza regime. The FSLN regained its governmental power in 2007, following an electoral defeat in 1990.

It is the height of hypocrisy that the U.S. would accuse any elections of being fraudulent after what happened in the 2020 presidential elections, when Donald Trump and his ilk did everything possible to steal Joe Biden’s victory by attempting to deny registered voters — especially if they were Black — the right to vote in Georgia, Pennsylvania, Arizona, Michigan and other states. It is also ironic that the U.S. deplores detentions of political opponents while having the highest prison population globally, 25% of the world’s incarcerated population.

A U.S. delegation, organized by the Alliance for Global Justice and the Nicaragua Network, spent the week of Oct. 3-10 visiting with governmental officials in Managua and Leon, who are responsible for developing many sectors of Nicaraguan society, including health, education, security, housing, autonomy, disaster response and more.

Despite an unsuccessful two-month, right-wing coup attempt in 2018 and being one of 39 countries under U.S. sanctions, Nicaragua continues to develop its mixed economy, with a large emphasis on self-sufficiency amongst the masses.

One of our delegation meetings included a discussion Oct. 4 in Managua with the Supreme Electoral Council. This body organizes national, municipal and local elections in this country of 6 million people. The electoral process was outlined to the delegation by Brenda Rocha and Cairo Amador, president and vice president of the SEC, respectively.

Rocha and Amador stated that the SEC’s role is to strengthen and defend the democratic process, create conditions for the people to defend their rights and to carry out elections based on the laws in the country’s constitution. They told us that about 68% of the electorate voted in the 2016 elections, in which the FSLN won 72% of the vote. Five other national parties ran for office, including for the National Assembly, that year. The minimum voting age is 16.

Defense of Nicaragua vs. U.S. hostility

Two days after this meeting, on Oct. 6 the delegation paid a visit to the U.S. Embassy to deliver a protest letter to Kevin Sullivan, the U.S. ambassador to Nicaragua. The letter, accepted by his office, reads in part, “We come to Nicaragua deeply concerned regarding U.S. policy toward the country. We represent social justice forces in the United States today. Our group and networks are part of a movement supportive of Nicaragua, with decades of deep-rooted ties to the country and its peaceful development.

“We have learned that more than 60% of the national budget of Nicaragua is used to meet the basic needs of the population, including free health care, education and infrastructure. Even with limited resources, the country has made dramatic gains in gender parity, health and nutrition status.

“Clearly a developing country of 6 million people is not an ‘an unusual and extraordinary threat to the national security and foreign policy of the United States of America,’ despite such declared justification in proposing and passing both the Nica Action and the proposed RENACER Act. These laws represent extreme political weapons that directly target defenseless civilians and undermine the progress in development to date.

“Despite decades of hostility from different U.S. administrations, Nicaragua has continued to make progress in addressing the needs of its people. Every country has a right to peace, sovereignty and development [without] foreign interference. Nicaragua deserves the same. We urge respect for the democratic electoral process that will take place in Nicaragua on Nov. 7, 2021.”

The attention of the world will be on Nicaragua Nov. 7, especially on whether or not the U.S. attempts to intervene or does not in its aftermath. U.S. activists plan to be in Nicaragua to show their solidarity with the electoral process there.