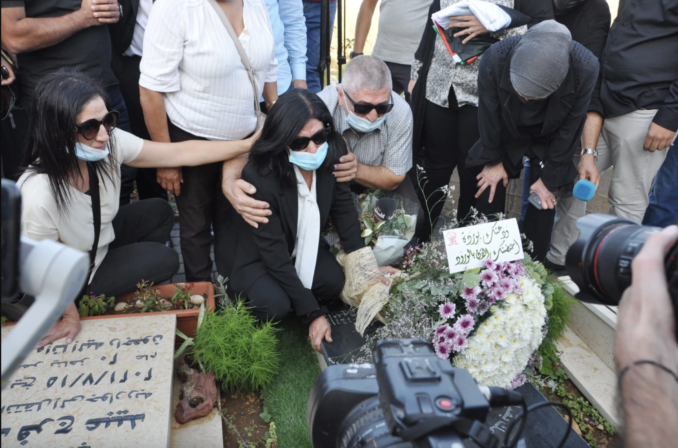 Hours after her Sept. 26 release, Khalida Jarrar visits the grave of her daughter, whose funeral she had not been permitted to attend.

Khalida Jarrar, a major leader of the Popular Front for the Liberation of Palestine, was released Sept. 26 from Israeli prison after two years incarceration. Jarrar, a left-wing resistance leader and elected representative of the Palestinian Legislative Council, had been jailed since Israeli occupation forces arrested her Oct. 31, 2019, and later found her guilty of membership in the PFLP, a Marxist-Leninist Palestinian organization.

Prior to the 2019 arrest, Jarrar had been arrested and held without charge for 20 months.

While Jarrar was in Israeli custody, her daughter, human rights advocate and environmental scientist Suha Ghassan Jarrar, died at just 31 years old. Khalida Jarrar was not permitted to attend her daughter’s funeral.

At Ramallah cemetery, just hours after she was left at a military occupation checkpoint in Jenin, Jarrar was joined by other senior PFLP leaders at Suha’s grave.

“They forbade me from participating in the funeral of my beloved daughter and from planting a kiss on my daughter’s forehead. They denied me her farewell. The last time I hugged Suha was the night of my arrest in 2019.”

From the river to the sea — Free Palestine and all political prisoners!