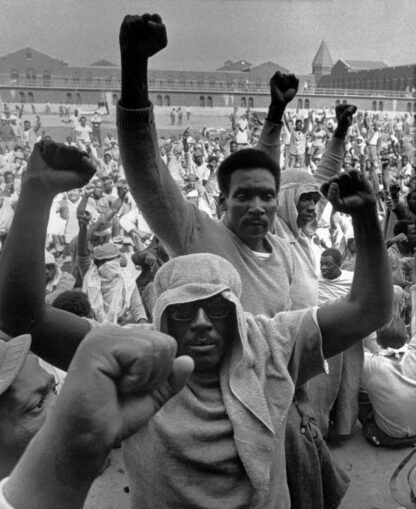 These remarks were given Sept. 29 during a webinar,“Attica Prison Rebellion: Past to Present,” sponsored by the Dallas Chapter of the Justice Initiative of Southern Methodist University.

​​In 1961, George Jackson was sentenced to one year to life in prison for stealing $70. While caged at San Quentin State Prison, Jackson became involved in revolutionary activity. He studied Marx, Lenin, Trotsky, Mao, Engels and Ho Chi Minh, among others. Jackson, along with W.L. Nolen, founded the Black Guerrilla Family, an organization dedicated to the Black Liberation struggle.

In his rousing book, “Blood in My Eye,” Jackson writes: “Prisoners must be reached and made to understand that they are victims of social injustice. This is my task working from within. The sheer numbers of the prisoner class and the terms of their existence makes them a mighty reservoir of revolutionary potential.”

On Jan. 17, 1970, Jackson, along with Fleeta Drumgo and John Clutchette (collectively known as the Soledad Brothers), were wrongfully charged with the murder of a prison guard. The capital murder offense, if they were convicted, would have resulted in Jackson and the other Brothers being sentenced to death.

On Aug. 7, 1970, Jonathan Jackson, George’s 17-year-old brother who George considered to be his “closest comrade,” led a rebellion at the Marin County Courthouse in San Rafael, Calif., and demanded the immediate release of the Soledad Brothers. During the rebellion, Jonathan freed William Christmas, James McClain and Ruchell Magee, but his demands were unmet. He, along with Christmas and McClain, were murdered by police. Ruchell Magee survived and is now the oldest political prisoner. Magee, 82, has been caged for 58 years.

Words from the past, still ringing true

While preparing for this event, we came across a letter that Jonathan wrote to George explaining the social/political conditions developing since George was incarcerated, and we wanted to share a few of those words with you all.

Jonathan Jackson wrote: “The issue of employment is still the same; we do 30% to 40% of the nation’s work for 1% of the returns, and a huge pool of us is always kept unemployed to reduce the value of the labor of those who are, just like 100 years ago, just like 1864-65 when we were thrown on the labor market — hungry, ragged, crowded into clapboards and unhappy. Nothing has changed since you left the street, comrade, not in this respect at least. Perhaps our condition stands out a little more glaringly, that’s all.”

Half a century later, Jonathan’s words still characterize current conditions for oppressed people. Why are these factors rarely discussed in our school classes?

One year after Jonathan’s assassination, George Jackson was murdered Aug. 21, 1971, by prison guards. His death inspired incarcerated people throughout the U.S. to engage in acts of resistance, including those at Attica Correctional Facility in New York state.

Along with the assassination of George and Jonathan Jackson, the circulation of a letter, “An Anatomy of the Laundry,” written by Sam Melville, an incarcerated person at Attica, served as a catalyst for the Attica Rebellion. In the letter, Melville explained the outrageous exploitation of incarcerated workers and their labor.

First and foremost, the incarcerated people at Attica were organized. They elected other incarcerated folks such as Elliott James “L.D.” Barkley, Roger “Champ” Champen, Richard “Brother Richard” Clark and Mariano “Dalou” Gonzalez to represent them during negotiations. They set up medical stations and worked together in keeping the hostages and themselves safe. Frank “Big Black” Smith was appointed as head of security.

During the negotiation process, incarcerated people generated demands. Some that really stood out to us were: #1: Apply the New York State minimum wage law to all state institutions. STOP SLAVE LABOR. #6: When an inmate reaches a conditional release date, give him a full release without parole. #7: Cease administrative resentencing of inmates returned for parole violation. #15: Remove inside walls, making one open yard and no more segregation or punishment.

In law school, we learn that “reasonableness” is the standard for a lot of legal tests. While we researched materials about the Attica Uprising, we couldn’t understand what was so unreasonable about these demands and why 32 incarcerated people were murdered for simply asking for decency and dignity — the right to be treated as a human being.