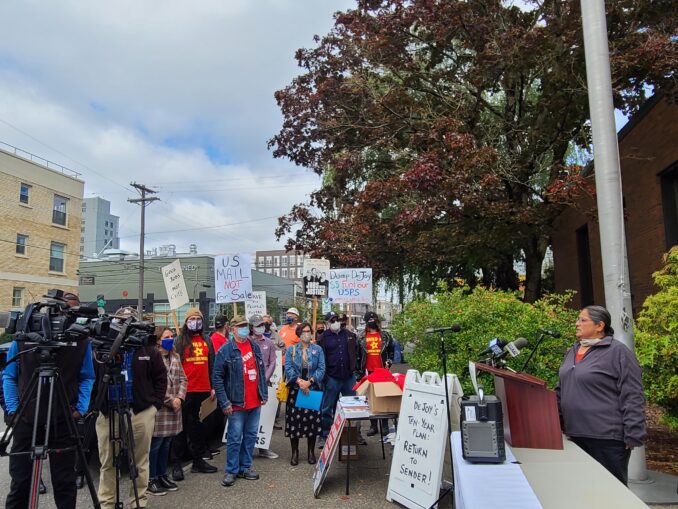 An Oct. 1 rally in Portland says, ‘Save the USPS!’

DeJoy has $70 million invested in companies that compete with the USPS. His plan aims to delay 40% of first class letters and parcels, raise prices, make cuts to services and close many mail facilities.

Twenty-one states’ attorneys general, including Oregon’s Ellen Rosenblum, have warned “the proposed changes would have a detrimental impact on residents who rely on the Postal Service to pay bills, receive paychecks and public benefits and vote.” Those changes, they argue, would especially hurt rural and low-income residents with few alternatives from USPS delivery.” (tinyurl.com/492fjdb8)

Ken, who spoke for Veterans for Peace, said he relies on the mail to deliver his prescriptions, which are now taking over a week to arrive. He said veterans have a saying: “Fire DeJoy, save a Vet!”

Sara Kowalesky, representing Jobs with Justice, told the rally, “We will fight to ensure this constitutionally mandated service does not turn into the likes of Amazon.”