The following are excerpts given at a Sept. 19 “Shut Down Fayette” rally in front of Eastern State Penitentiary in Philadelphia, Pa. 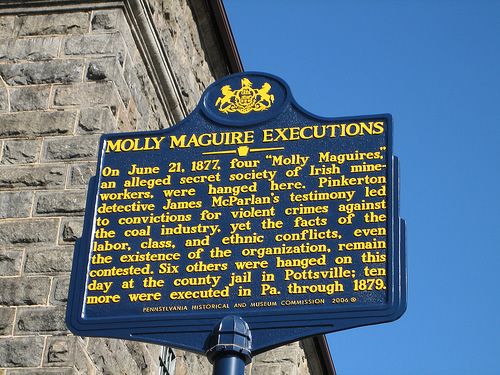 My great-great-grandfather, Michael Kelly, was born in Schuylkill County. His parents were from Ireland. He was the first in my family to be born in this country. By 1870, the Kellys were living in Mahanoy. When he was probably about 10 years old, Michael started working down in the coal mines, the same mines where his father died.

His father, John Kelly, was one of those radical mine workers, the Molly Maguires. The Mollies made demands for better pay, better working conditions. If the demands weren’t met, they fought for them by caving in the mine entrances — or by caving in the heads of mine owners. John Kelly was arrested in a mass roundup of Irish laborers, after a Catholic priest who sided with the mine bosses got beat up. The charges didn’t stick. Everyone arrested acted as each other’s alibis. So the story goes.

The mine bosses then teamed up with the Pinkerton Agency to infiltrate the Mollies and bust up labor organizing and solidarity. Sixteen Irish coal miners were accused, convicted and executed in just two years from 1877 to 1879, including Alexander Campbell, Yellow Jack Donohue, Black Jack Kehoe and Edward J. Kelly.

Michael’s son and grandson would later join the most notoriously violent white-supremacist gang around: the Philadelphia Police Department.

The current landlords of the Eastern State Penitentiary turn a handsome profit every Halloween by turning this old concentration camp into a haunted house, inviting the public to gawk at torture chambers like a carnival sideshow.

Despite the money they rake in, they still charge family members $75 to request information about the records they have rotting away in there.

Michael Kelly died in 1947, homeless, without a penny to his name. He was 78, a decade older and as poor as his father was when he died.

It’s been hundreds of years now since that process of unearthing, since they first dug those mines. And once they hauled out as much coal as technologically possible, they sealed them back up. After that, workers stayed in the old coal towns or moved away like Michael Kelly. All of them were subjected to the same cruelties of capitalism regardless.

Immigrants and poor workers are still being locked underground in these places. Some are prisoners; some are guards. All of them are subjected to the same toxic air and putrid water.

If you’re Black, Latinx or Indigenous, chances are you wear the brown jumpsuit, because while this system wages war on all workers, it has special contempt for those ineligible for “whiteness.” If you are white, you’re probably in the gray uniform, because the 1994 crime bill authored by warden-in-chief Joe Biden was not so much about solving the problem of “crime,” as much about solving the problem of what to do with all these unemployed white folks in places like Schuylkill County.

The mines were closed; the chemical and textile factories were shut down. The crime bill was really just a jobs program for rural workers. Anti-Blackness, once again, was the price of a paying job.

They need to fill a prison with human beings, overwhelmingly Black and Brown.

Mumia Abu-Jamal is the one who taught me all this. He’s sitting in a cell right now at SCI Mahanoy. That’s where Mumia and thousands of other poor and oppressed workers are locked away from their families, locked up in those same tunnels, locked in with all the poisons and carcinogens.

One of those incarcerated people is Bryant Arroyo. What he did at SCI Mahanoy prompted Mumia to dub him the world’s first jailhouse environmentalist.

One day in 2005 Bryant found an Environmental Protection Administration notice on the bulletin board. It announced plans to break ground on a several hundred million dollar, coal-gasification plant. For hundreds of years the capitalist state spent its resources digging holes in the ground, until it killed the land and poisoned everyone who lived on it.

It’s the 21st century now, and how does the capitalist state spend its resources? Not for health care for the people it poisoned for generations. Not for food and housing. It develops new technology to dig up new poison from the old holes.

Bryant knew right away that this meant death. Not just for him and for those he was incarcerated with, but for the people living in Schuylkill County, even for the guards and the guards’ families.

He organized. He got through to the local paper. He got hundreds of fellow incarcerated people to write in, to sign their names individually, because it’s illegal for multiple prisoners to sign their names on one piece of paper. That would be a petition. And prisoners in Pennsylvania are not allowed to sign petitions.

From behind bars, he rallied the community whose livelihood was predicated on keeping bodies behind those very bars. He showed them that they all have a common enemy.

The gasification plant was shut down. A couple billionaires became very angry and lost a lot of money because of Bryant Arroyo, a Puerto Rican grandfather who has been locked up for 25 years and sentenced to life in prison for a crime he did not commit.

Revolutionaries mobilize the people to work for our common good and fight against our common enemy — capitalism. It’s white supremacy, imperialism.

The threats faced by working and oppressed people today are on a scale never seen before. We have suffered too many tragedies, buried too many ancestors. We don’t need any more martyrs.

Behind the walls of these prisons is a revolutionary people’s army that is millions strong.