We’ve heard it all before. The U.S. government claims a plot, an aggression or a humanitarian crisis in another country. Washington then uses the claim to justify military invasion, occupation with “boots on the ground” and/or war by sanctions — wars that go on for years, for decades.

And always — surprise! — against countries that dare assert their right to national independence, economic or political, from U.S. “interests.”

Flash back to 1898: Expanding U.S. imperialism needed a pretext to invade Cuba, Puerto Rico and the Philippines — all under Spanish colonial control at that time. When the U.S. battleship Maine blew up in Havana Harbor — with no proof that Spain had touched the ship — U.S. newspaper headlines screamed, “Remember the Maine! To hell with Spain!”

And then Teddy Roosevelt’s Rough Rider cavalry began thundering and killing throughout Cuba.

Fast forward to 2003: U.S. Gen. Colin Powell, in front of the U.N. Security Council, swore that Iraq had weapons of mass destruction to justify the almost total destruction of the country by the U.S., through bombing, invasion, sanctions. He held up some props — a few aluminum tubes — and said, “My colleagues, every statement I make today is backed up by sources, solid sources. These are not assertions. What we’re giving you are facts and conclusions based on solid intelligence.” (“What Colin Powell Knew,” The Intercept, Feb. 6, 2018) 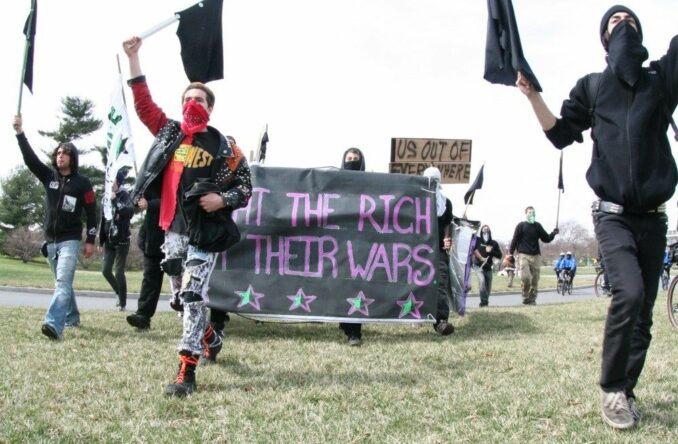 Marchers in Washington, D.C., protest the Iraq War March 21, 2009, with the banner, “Fight the rich, not their wars.” Credit: Vic Reinhart/OhioOakTree

Powell’s “factual” statement was exposed as the Big Lie in 2004 through information gathered by thousands of U.N. and U.S. inspectors on the ground in Iraq. They found no “weapons of mass destruction” in Iraq, no concrete plans to create WMD, no capacity to build WMD and no verbal encouragement from Iraqi officials to build WMD.

In 2001, the U.S. government waved the flag of “human rights” — women’s oppression in Afghanistan by the Taliban — to justify a war to control that country’s land, labor, wealth, mineral resources and its pathway to oil and gas.

In 2021, the U.S. is withdrawing from Afghanistan. Women and girls there will be under reactionary Taliban rule. There is rightful concern about that.

No progressive revolution is occurring. That happened in 1978, when Afghan socialists and communists took power and began to overturn centuries of patriarchal rule in the country. But U.S. intervention and CIA plotting ended that positive development — and set in motion events that put the Taliban in power. (“Beware the Siren Song: Women and Afghanistan,” workers.org)

We can’t be deceived by the capitalist crocodile tears now being shed about the fate of women in Afghanistan. How did Madison Avenue women respond to the plight of Afghan women and girls when the U.S. began bombing them in 2001? Anna Wintour, editor of Vogue magazine, organized a shipment of free lipstick to that country, allegedly to raise women’s “morale” — really to test a new market for the cosmetics industry. (London Telegraph, Nov. 17, 2002)

We are for women’s liberation, and we are against imperialism at the same time. We know that women and gender-oppressed people will never find a path to liberation through the morass of capitalism and imperialism.

There is an endless list of wars in which imperialists performed their sleight of hand to mask the fact that they are the oppressors and capitalism the oppressive system.

The U.S. government, whether headed by Democrats or Republicans, fabricates evidence, deceives by omission, undermines progressive movements and pits us against each other — to try to fool workers and oppressed people and force us to toil and kill for the capitalism that exploits us.