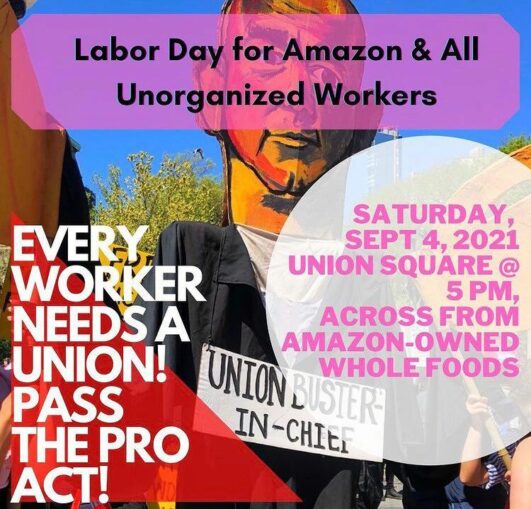 Workers Assembly Against Racism issued this call to action Aug. 22.

What has traditionally been the time of year for New York’s Labor Day Parade will this year be Labor Day for Amazon and All Unorganized Workers.

On Saturday, Sept. 4, join WAAR, Chris Smalls and workers fighting to organize Staten Island’s [Amazon] facility, as well as other workers from other crucial struggles, to demand unions, labor rights and implementation of the PRO Act.

Seemingly all-powerful Amazon, the world’s biggest retail store outside China, has been handed an National Labor Relations Board defeat, thanks to the struggle of the majority African-American workforce in Bessemer, Ala.

Amazon’s bosses claimed the union in Alabama lost that fight because the workers didn’t want a union. But the NLRB officer who reviewed that vote said that no, the workers were flat-out denied their right to vote by Amazon.

Will a second election at the Alabama warehouse mean victory for the union? Getting out on the streets now with the NLRB statement at our back is the way to make that answer YES — and at the same time support the workers fighting Amazon in Staten Island, Seattle, Wichita, Iowa, Chicago, Minneapolis and dozens of other locations.

If the traditional Labor Day parade isn’t happening, why not take it over as the day to move the workers’ struggle to a new level? For Amazon workers, for the PRO Act, for all workers who need protection as the Delta variant reignites a dangerous situation for workers, all of whom are essential for society to function.

And by workers we mean anyone not in the 1% — employed, unemployed, migrants, gig workers, sex workers, unhoused, students, people with disabilities, fighters in the Black Lives Matter movement and those incarcerated, detained and framed-up.