This article is based on a press release issued by Chris Smalls and the Amazon Labor Union. 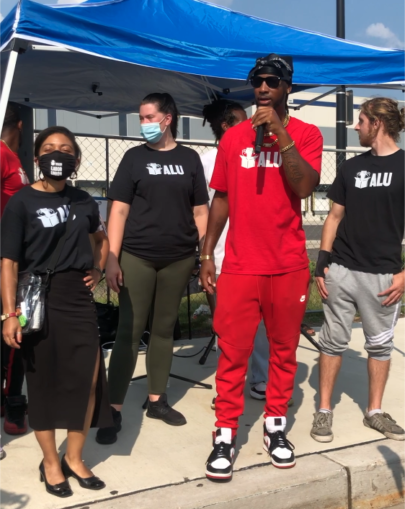 Since June, workers at the Amazon warehouse at Staten Island JFK8 and surrounding facilities have been organizing to form the independent worker-led Amazon Labor Union. Other Staten Island facilities currently organizing include Amazon sorting center LDJ5 and delivery stations DYY6 and DYX2.

ALU goals are to fight for higher wages, job security and safer working conditions. ALU has successfully built a huge workers’ committee and signed up over 1,000 workers. This puts the campaign on target to file for recognition with the National Labor Relations Board in the coming months.

On Aug 11 at JFK8 Staten Island, ALU held its first press conference to announce the historic campaign. Members of the committee voiced their experiences and told why they decided to join ALU. Workers were joined by U.S. House members Alexandria Ocasio-Cortez and Mondaire Jones, there to support the ALU and demand Amazon to stop its union busting so workers can use their rights to organize towards collective bargaining without interference.

After the launch of the drive, Amazon wasted no time in starting its union busting. Organizers and workers endured the same anti-union tactics used during the unionization campaign at the Bessemer, Ala., warehouse earlier in the year.

The NLRB ruled in May that Amazon illegally interfered with worker organizing at the Staten Island warehouse. Ploys have ranged from disinformation signs in the bathrooms to the hiring of operatives from The Burke Group to walk through the buildings and spread doubt among the workers. (tinyurl.com/3sc9pesw)

Despite Amazon anti-union attempts, ALU has earned the trust of the workers, hosting a number of barbecues, handing out food and cold water along with masks and T-shirts daily.

Amazon refuses to acknowledge ALU as a current worker-led entity. Instead, the company sends out false messaging that workers will lose their voices and that ALU will take in millions of dollars in union dues and cause unspecified financial problems.

To combat these scurrilous charges, ALU members have filed several charges against Amazon with the NLRB.

This is a remarkable historical moment for Amazon workers all over the U.S. ALU has already broken barriers and will continue to do so. As the workers get closer to filing for their election vote to become an established union, they will need the support of their communities more than ever.

To find out how to support this crucial union drive, follow the Amazon Labor Union at amazonlaborunion.org and @Shut_downAmazon.