Over the past several months, the Western media have grown increasingly alarmed over reforms in China that significantly rein in private capital and strengthen the public sector. These reforms primarily target the tech industry, which has grown tremendously in size and power over recent decades. Western capitalist countries also grapple with the rising power of Big Tech, yet they cannot regulate the industry the same way China does. 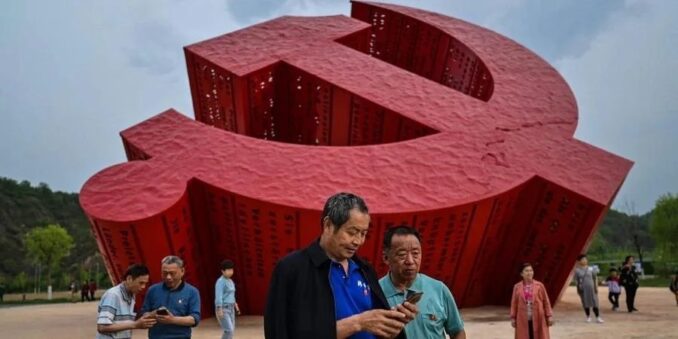 Monument of the hammer and sickle in Nanniwan, some 60 kms from Yan‘an, the headquarters of the Chinese Communist Party from 1936 to 1947, in Shaanxi province.

The reforms may represent the biggest policy shift since 1978, when former leader Deng Xiaoping instituted “reform and opening up,” allowing private capital, free trade zones and foreign direct investment in China. “Reform and opening up” led to rapid economic expansion. At the same time, it also created many severe contradictions and challenges, including environmental pollution, corruption and inequality.

Since becoming president in 2013, Xi Jinping has overseen many changes. An anti-corruption campaign begun in 2012 was intensified under President Xi and took down 120 high-ranking officials. Some 100,000 lower-level officials were charged with corruption. Since the government initiated a war on pollution in 2014, air pollution in China’s cities has dropped by more than a third. Smoggy skies are now a rare occurrence in Beijing as China leads the world in reforestation efforts and renewable energy production.

Before it was set to go public, the government launched an anti-trust investigation of Ant Group, effectively scuttling its IPO. Ma, who criticized China’s regulatory approach, went conspicuously silent in the aftermath and has since emerged in public only a few times. The investigation sent a clear message that all firms in China must ultimately be subservient to the state and the Party, not the other way around.

The private tutoring sector was regarded by many as a net negative that saddled students with more school work, burdened parents with expensive fees and exacerbated inequality. The Ministry of Education posted on its website that the industry, valued at $100 billion, had been “severely hijacked by capital.” The state will now offer free online tutoring to help fill the gap.

Yuan Yuwei, a fund manager at Olympus Hedge Fund Investments, commented that it “is the most forceful reform I’ve seen over many years, and the most populist one. It benefits the masses at the cost of the richest and the elite groups.” Zhaopeng Xing, senior China strategist at ANZ, said the new policies “send a message that China is not a capitalistic country, but embraces socialism.” (asiafinancial.com)

The food delivery industry, another growing arm of Big Tech, has similarly fallen under increased regulation. Workers must now earn above the minimum wage and be provided with insurance. Delivery times have been relaxed as well. Food delivery companies have garnered searing criticisms online over their treatment of workers. The government has listened to the complaints, moving swiftly to regulate the industry. (Reuters, July 26)

These policies underscore China’s revolutionary roots. The Communist Party is striving to build a fully developed socialist society by 2049, a century after the founding of the People’s Republic, but the current era of “reform and opening up” has led to greater inequality and the rise of a capitalist class. Now this is officially to come to an end, with economic growth no longer being the main priority.

The elimination of poverty and inequality, along with environmental sustainability, now feature prominently in the Party’s aims. To achieve these goals will take a class struggle within China to rein in the bourgeoisie, once again.