Preparations are under way in Brookwood, Ala., for an Aug. 4 solidarity rally for striking United Mine Workers (UMWA) members who have maintained a picket line 24 hours a day, seven days a week, at the entrances to Warrior Met Coal facilities since April 1. 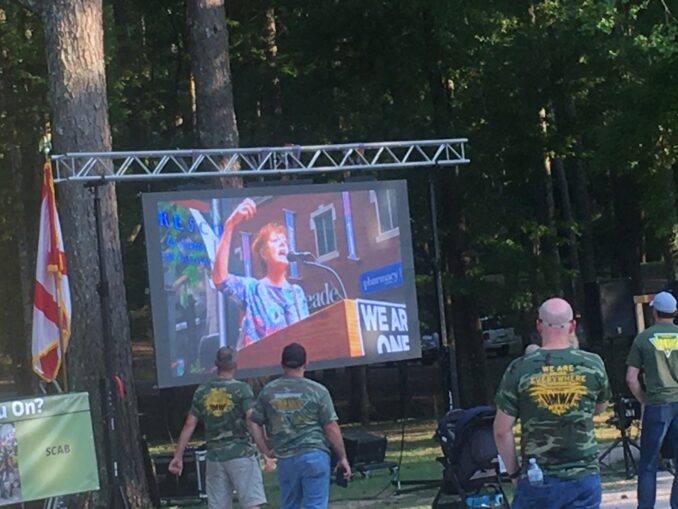 In Alabama coal miners on the picket line at Warrior Met Coal watch the rally on Wall Street held by their United Mine Worker siblings and other union supporters July 28 in New York City. Actor Susan Sarandon is seen chanting with the crowd: “One day longer, one day stronger!”

Miners, other union members and community supporters are expected to travel  from near and far to let the Wall Street hedge fund investors backing Warrior Met know that this is a battle the working class is determined to win.

This writer will be travelling to Brookwood on a bus caravan leaving from Atlanta organized by the Georgia State AFL-CIO. Retired UAW members have already filled one bus as of this writing.

Brookwood is just 30 miles from Bessemer, Ala., where the recent historic attempt by the Retail, Wholesale and Department Store Union to organize workers at an Amazon warehouse inspired class solidarity across the U.S. and around the world. Despite its racist Jim Crow power structure, Alabama has a long legacy of unionization in mining and steel production, uniting Black and white workers.

According to Larry Spencer — International Vice President of District 20, UMWA, and a coal miner himself for 10 years — the strong bonds among miners are rooted in their absolute reliance on each other to stay alive, as they work hundreds and hundreds of feet underground under extremely dangerous conditions.

In 2016, Warrior Met bought out the Jim Walters coal company when it went through bankruptcy. In order to save their jobs, the workers agreed to sharp concessions with the promise that, when profitability was restored, the cutbacks in wages and other benefits would be eliminated in the 2021 contract.

Now the highly paid bosses of Warrior Met Coal have stonewalled negotiations to raise pay — even to the level of five years ago — or to end the exceedingly excessive work hours of 12 hours a day, six and seven days a week.

Warrior Met has brought in scabs from other states, who, Spencer reported, have  in several instances deliberately tried to run over picketers with cars or trucks.

Delegations of miners have traveled to New York City twice to picket on Wall Street, including July 28 at the offices of BlackRock, the hedge fund with the largest investments in Warrior Met Coal. BlackRock is a major shareholder in some 18,000 companies, banks and financial services firms in the U.S., EU, Britain, Asia and Latin America. (Workers World, “BlackRock capital finance works with Republicans and Democrats,” January 26)

The courageous coal miners of Brookwood, Ala., are facing off against the monied interests of the capitalist class.

It is the task of all workers, organized and unorganized, to join in solidarity to secure a victory in this fight!

Larry Spencer’s remarks are from an interview with “The Labor Forum,” a program of  WRFG 89.3 FM in Atlanta. The interview aired Aug. 2. For a schedule of the weekly audio programs, check wrfglaborforum.org.