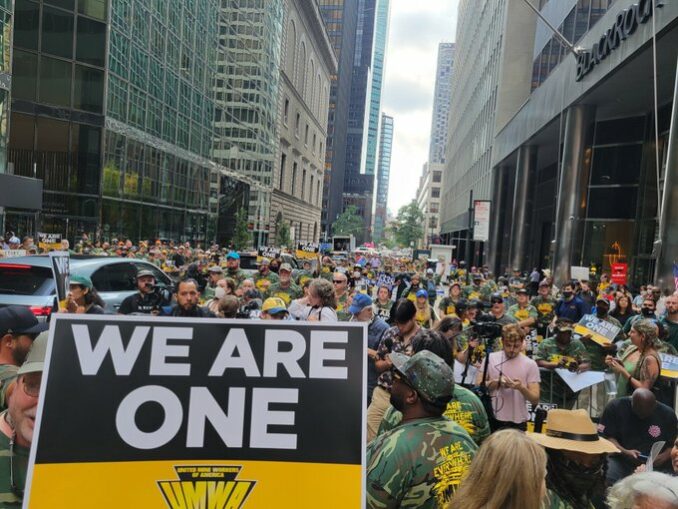 The Brookwood, Ala., miners have been on strike since April 1 for better working conditions, pay and benefits. These members of United Mine Workers (UMWA) Locals 2245, 2368 and 2397 say the big hedge funds that provide financial backing to Warrior Met are blocking progress toward a fair contract. The coal company is “the leading dedicated U.S.-based producer and exporter of high quality metallurgical (‘met’) coal for the global steel industry.” (Business Wire, Feb. 24)

The Alabama miners brought their struggle to New York City and were welcomed with tumultuous solidarity by other workers and union leaders at the rally, including some present from South Dakota, Pennsylvania, Ohio and West Virginia, as well as the New York metro area.

The ralliers ultimately took over the entire street in front of BlackRock.

Kooper Caraway, president of the South Dakota Federation of Labor, emphasized: “I’ll tell you this — young workers . . . South Dakotans, Californians, workers all over the world are going to stand with you and support you; and there’s nothing BlackRock or any other rich asshole can do about it.” Caraway, who at 27 became the youngest Central Labor Council president in the U.S., began organizing as a teenager in Texas against Immigration and Customs Enforcement (ICE) raids.

Stuart Appelbaum, president of the Retail, Wholesale and Department Store Union, shouted from the stage: “From Alabama to New York, from retail workers to miners, this is everybody’s fight!” Earlier in 2021, RWDSU waged a fierce struggle to organize almost 6,000 predominantly Black workers at a Bessemer, Ala., Amazon warehouse.

Academy Award-winning actor and activist Susan Sarandon, punching her fist in the air from the rally podium, affirmed the miners’ strike slogan: “One day longer, one day stronger”; and she was immediately joined by hundreds of voices repeating the pledge.

Many union locals were present at the rally, with members waving signs and tweeting pledges of support. RWDSU Local 338 messaged: “Local 338 stands in unyielding support of UMWA @MineWorkers in their fight for a fair contract! No contract, no coal!”

Mine workers, families fighting ‘no matter the cost’

Alabama miner Braxton W tweeted from the rally: “We Are One is the message we sent to BlackRock today in New York. As #unions, as workers, we will stand and fight for ourselves and all of our brothers and sisters no matter the distance, no matter the industry, no matter the cost. We will be here #onedaylonger #1u #Solidarity.”

In a rally video, Left Voice asked Alabama miner Josh Krim what he was fighting for. He replied: “To get to spend time with our families. From the time I hired in, I’ve had, literally, two days off. That’s it. We’re on an 800-hour probationary period. Being new, like me, you’re lucky to get a day off. I literally didn’t see my kid for two months. And that — that’s rough. While we’re here trying to get a contract, those COOs and CEOs, those big people who run Warrior Met, they’re at the beach, kicking back. They don’t care. We’re fighting to survive so we can get back to work. We’re here till it’s over. We’re not giving up.” (Twitter, July 28)

The Alabama miners labor in one of the world’s most life-threatening workplaces. The Brookwood mines are sunk 1,400 to 2,100 feet underground — some of the deepest vertical-shaft coal mines in North America. In 2001 methane gas explosions and a cave-in at one of the mines killed 13 workers, including a former high school classmate of this writer.

Krim said of working conditions: “Dusty, really dusty. Most days we’re there at least a minimum of 12 hours. No light other than what’s on your hard hat. In the dark pretty much all day.”

Alabama miners, still on the picket line 24 hours a day, seven days a week, watched the rally on a big screen as they defended the line. One of the women of the local UMWA auxiliary recently survived a vehicular attack on the line. The auxiliary has worked overtime to keep their union families fed, clothed and cared for.

On July 31 labor reporter Kim Kelly tweeted she was “getting reports of yet another vehicular attack on the #WarriorMetStrike picket line . . . just days after hundreds of strikers traveled to NYC to protest in front of Warrior Met investor BlackRock.”

An Aug. 4 support rally has been called in Alabama. Plans are for labor leaders and members to come from across the country.