“Rodney [Reed] had a Jim Crow trial in a kangaroo court. There’s not a system of justice. This was a conspiracy between the sheriffs, the police, the Texas Rangers and the District Attorney. The District Attorney knew Rodney was innocent, and she orchestrated all the lies for the all-white jury,” Sandra Reed, the mother of Rodney Reed, told Workers World. 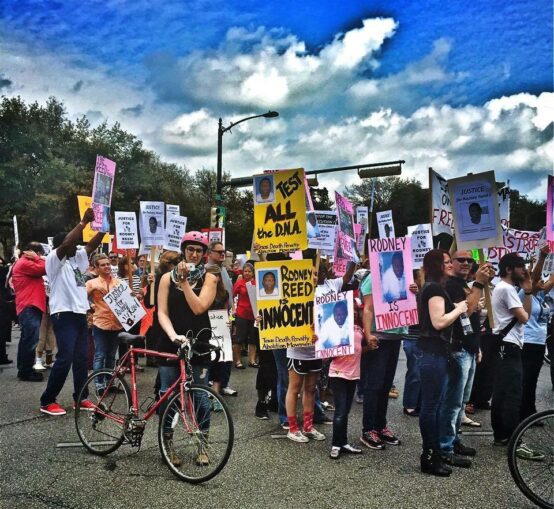 “The state never had any evidence on my son, and now everything is out for the whole world to see. I am more optimistic than ever,” she continued.

Rodney Reed has been on death row almost half his life, convicted of the rape and murder of Stacey Stites in 1998. Reed is African American, and Stites was white. They were having a casual, consensual relationship when she was killed in 1996. However, Stites was engaged to a white cop.

Reed was given an indefinite stay of execution in November 2019 by Texas’ highest criminal court and granted an evidentiary hearing. After several COVID delays, the hearing finally began July 19.

Over 50 of Reed’s supporters and extended family rallied outside of the courthouse July 17, wearing T-shirts and carrying picket signs reading “I Stand with Rodney Reed” and calling for his freedom. “We’re not going to stop, because we know the truth. And we’re going to stand on the truth, because it remains the same,” Reed’s brother Rodrick told the crowd. “And we will stand today to see justice done in this case.” (tinyurl.com/29nz4mjr)

Gathering at the Kerr Community Center in a nearby park, they received a phone call from Reed, just blocks away in the Bastrop County Jail. He thanked everyone for their support and asked them to continue the struggle and continue to fight.

The facts come out

Beginning July 19 and over the next four days, the defense called almost 20 witnesses. They testified that Reed and Stites were having an affair, but that it was scientifically impossible for Reed to have killed Stites, who was with her fiancé at the time she was killed. Witnesses described how others in law enforcement lied to protect Stites’ fiancé Jimmy Fennell, who was a police officer at the time of the murder.

All evidence points to Fennell as the likely killer. There was testimony that he was controlling and jealous. Fennell did 10 years in a state prison beginning in 2008, for raping and kidnapping a woman who had called the police for help.

Fennel failed two polygraph tests on the question of whether he had strangled Stites. And police had evidence connecting Fennel’s truck to the murder; however, the truck was promptly sold after Stites was killed, prohibiting any DNA testing on its contents. (tinyurl.com/hb8mpm)

An audible gasp could be heard in the courtroom when Arthur Snow testified. Snow met Fennell in prison, when Fennell sought protection from a white-supremacist gang. Snow said that Fennell told him, “You wouldn’t believe how easily a belt would break, strangling a (n-word)-loving whore.”

The belt used to strangle Stites was found in two pieces nearby where her body was discovered.

After nine days, the evidentiary hearing closed. Presiding State District Judge J.D. Langley will hold closing arguments mid-August. He will submit his findings to the Texas Court of Criminal Appeals, which will then review the new evidence and Langley’s opinion. The Criminal Appeals Court will then determine whether Reed should go free, get a new trial or be executed.

Why is Reed’s case so important?

What has happened to Reed, a Black man, is typical of what happens in the criminal injustice system, whether it is in small-town Bastrop, Texas, or in metropolitan New York City.

Prison Policy Initiative reveals that “Black people make up 40% of the incarcerated population, but only 13% of the general United States population; and Black families, regardless of individual involvement with the criminal-legal system, lose their loved ones to prisons and jails at higher rates than their white counterparts.” According to PPI, 62.9% of Black people in the U.S. have an immediate family member incarcerated.

Reed’s father Walter died unexpectedly about a decade after Reed was put on death row. And PPI has reported new data that shows that people with incarcerated loved ones have shorter life expectancies and poorer health. (tinyurl.com/s6mdayb)

In courtrooms across the U.S., prosecutors regularly withhold evidence from the defense that could blow holes in their cases. That’s a violation of a 1993 Supreme Court decision that says the prosecutors must turn over any information favorable to the defense.

The murder weapon in Reed’s case, the belt used to strangle Stites, has never been tested for DNA evidence, despite repeated requests from Reed’s attorneys. As of January 2020, the Innocence Project has documented over 365 DNA exonerations in the U.S. Twenty-one of these exonerees had previously been sentenced to death.

The Reed family and the thousands of supporters across the country want Rodney to finally be free. We await the judge’s ruling, hoping it will be fair. Many thousands of eyes are watching. If a favorable recommendation to the Texas high court is accepted, we hope Rodney will be freed or at least have a new trial.

Dr. Martin Luther King’s words in his “Letter from Birmingham Jail” that he smuggled out of jail in 1963 certainly ring true for Rodney Reed. “Justice too long delayed is justice denied.”