Over 100 workers protested in front of Portland’s Voodoo Doughnuts July 30 for the illegal firing of 11 workers. Joining the picket line were workers representing over half a dozen unions and coming from as far away as Seattle. 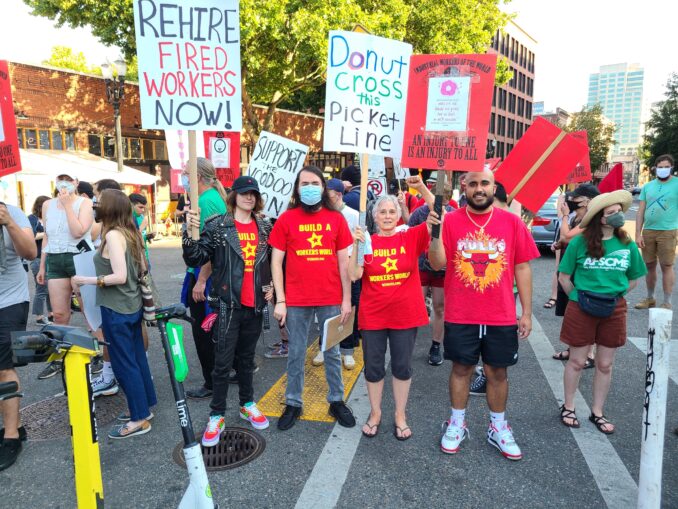 Workers demonstrate in front of Voodoo Doughnuts. Early this month, when Portland’s record-breaking temperatures hit 116 F, many businesses closed due to unsafe working conditions. But Voodoo Doughnut  workers were expected to keep working inside the kitchen with weak air-conditioning, large southwest-facing windows and deep fryers boiling.

The workers said on their Facebook page that the temperature at the shop was so high that customers stepped inside and immediately departed. “The doughnuts themselves melt in the heat, as the frosting never fully dries.”

When some of the workers started to pass out and show signs of heat exhaustion, the manager told them, “If you’re too hot, you can go home.” (tinyurl.com/9rt5jvk2)

Thirteen workers left for two days until temperatures lowered towards 100 F. But when they returned, 11 of them were fired, some of whom she knew were union organizers.

The workers formed Doughnut Workers United in March of last year, but have not been formally recognized by Voodoo’s corporate office. The union is affiliated with the Portland chapter of Industrial Workers of the World and gets support from Teamsters Local 225. They have filed complaints with the Occupational Safety and Health Administration, Oregon State Bureau of Labor and Industries and the National Labor Relations Board, for unlawful retaliation for an unsafe work refusal.

Voodoo doughnut has locations in 11 cities including Orlando, Houston, Hollywood and Denver.  Mark Medina with IWW told WW: “There were demonstrations in support of the Portland Voodoo Donut wokers in Los Angeles, Houston and Austin, Texas and Eugene, Oregon.”