A crowd of around 50 people, mostly Korean, gathered in front of the U.N. July 27 to demand the U.S. finally sign a peace treaty with the Democratic People’s Republic of Korea (North Korea). For 68 years the U.S. has refused — there is only an armistice/ceasefire and the constant threat of U.S. war. 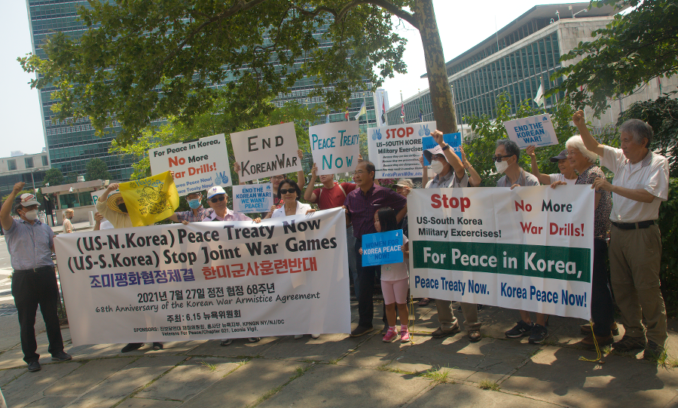 Demonstrators also called for an end to the ominous, annual U.S. “war games” on the Korean peninsula, described by the DPRK as a “rehearsal for war.”

Since the 1950-1953 Korean War, the U.S. military has retained the authority to control both South Korean and U.S. forces in the case of another war breaking out on the Korean Peninsula. There are still about 28,500 U.S. troops stationed in South Korea, along with tens of thousands of U.S. military contractors.

Harsh U.S. economic sanctions on the DPRK have continued for 68 years, even during floods, droughts and the global pandemic. Tens of thousands of homes and vast swaths of farmland were damaged during floods last summer.

— Photo and report by G. Dunkel