She was all of 96 years, yet Esther Bejarano’s death hits hard, leaving a painful gap in Germany’s anti-fascist scene. Until the final weeks of her long life, she was a fighter, speaking, singing and passing the good word along — especially to young people. 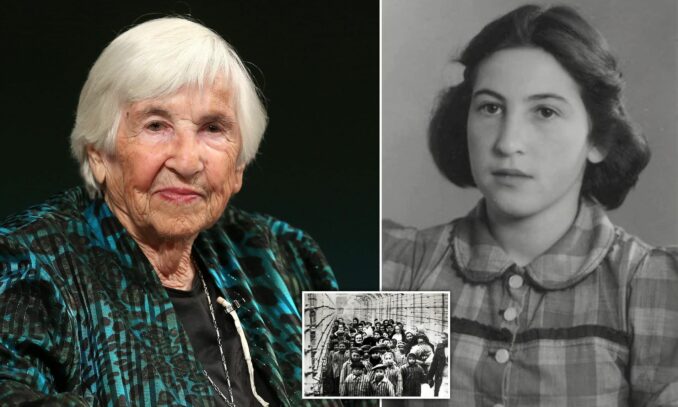 Her life almost ended horribly when she was 19, after being crammed into a cattle car with other Jewish Germans on a final route to Auschwitz. Unlike most of her family she survived, thanks to her ability to play the piano and please some Kultur-lover among the killers.

“Can you play the accordion too?” Yes, she lied, and picked up the basics quickly enough to be included in the “girl orchestra” used to calm and deceive incoming trainloads of human beings, thus avoiding incidents on the way to the gas chambers. It was a nasty job but enabled her to survive, until, after escaping the guards on a forced “death march” at the war’s end, she was rescued by Red Army and U.S. army units.

Esther went to what was still Palestine. I can add a personal note here. I was lucky enough, as a Harvard delegate, to go to the first World Youth Festival in Prague in 1947. At the Palestine evening we saw a chic, uniformed Zionist dance-and-song group organized by the Jewish Agency. And the Ron Workers Chorus, a leftist group, no uniforms, singing leftist songs, both Jewish and Arab like the singers.

The Festival asked both to perform on the same evening in one place. But after the Jewish Agency group finished and the Ron chorus was ready to begin, all lights in the huge opera house went out. A minute later they were back — and a cloud of leaflets with a Zionist message floated down from the top gallery. Only then was the chorus with Esther able to sing. So I saw and heard her 74 years ago!

She got married, had children, but was not happy. As she wrote: “My husband and I could not stand Israeli politics. It was a catastrophe. . . . Life was difficult because we did not agree with the terrible things that were done to the Palestinians.”

In 1960 she and her family made the dramatic move back to Germany, to Hamburg. But she had not forgotten her earlier suffering. She never ceased combating fascism and former Nazis wherever they showed their heads. In West Germany in the 1960s, that still meant in virtually every walk of life, right up to Chancellor Kurt Kiesinger (1966-1969) and President Heinrich Lübke (1959-1969).

She founded a German branch of the Auschwitz Committee in her living room and became honorary president of the Association of Victims of the Nazis, on occasion braving water cannon to stop neo-Nazi parades. She was active in peace demonstrations and supported Cuba against the blockade.

After 1988 she joined her son, her daughter and young Turkish-German musicians in groups playing modernized international songs, Jewish songs and new political songs for all the good causes, including the rights of Palestinians to conduct their boycott campaign. In countless schools she used her story to oppose the many inroads of the fascists, and her last action was to join in urging that May 8th, the day of victory over the Nazis, be made a national holiday.

Most media and many politicians voiced their praise and mourning — after almost totally ignoring her in life and attacking and trying to squelch organizations she was active in, as an avowed Communist. They stressed how she had always fought anti-Semitism. She had indeed, ceaselessly, but not in the way they used the term, labeling everyone an anti-Semite who criticized Israeli government policies, its settlements, occupation, repression, its missile and drone attacks.

Her opposition to this and her clearly leftist views and actions have gone almost unmentioned by officialdom and its media. But not by the thousands who attended the funeral ceremony, who had loved her, fought at her side, enjoyed her music — and would greatly miss her.