This statement was issued by the Network of Intellectuals and Artists in Defense of Humanity, Our America, and translated in Resumen Latinoamericano — English, July 12, 2021. 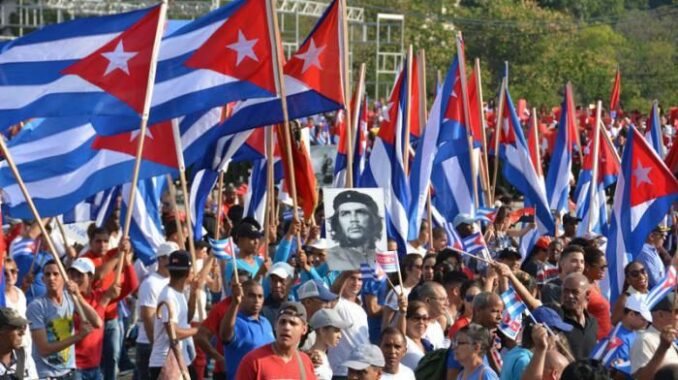 Millions march in Cuba in support of the revolution on May 1, 2021.

In absolute unison with the revolutionary Cuban people, the Network of Intellectuals and Artists in Defense of Humanity (REDH) calls on the entire world to remain alert and oppose the interference that the U.S. government and its cronies intend to apply in Cuba. We send a warning about the implications of the recent campaign for a “humanitarian corridor” that the United States is promoting under the pretext of the pandemic, because Cuba is not only a unique country in the South, which, in addition to being among the first in the world in the vaccination ranking thanks to its universal policies of humanistic health care and high professionalism, has one of the lowest death rates for the pandemic.

Cuba has supported dozens of countries with their offering of humanitarian assistance to save lives, while the so-called “humanitarian interventions” imposed by the U.S. are all about occupations, designed only to bring about destruction, misery and the most atrocious violations against the dignity of nations and individuals.

The U.S. government is determined to provoke a social explosion in Cuba. To that end, the administration of Joseph Biden has not only left every bit of the cruelty of the sanctions that his predecessor Donald Trump put into place, but has even tightened them, ratcheting up the subversive drift against Cuba. Trump redoubled the maximum cruel measures of the economic, financial and commercial blockade; moreover, he took advantage of the economic repercussions caused by the pandemic to impose additional punitive measures.

It is the imposition of these illegal sanctions that affects Cuba, and that is why the people, the government of Cuba and the international community itself are urgently calling for an end to the blockade.

The Network of Intellectuals and Artists in Defense of Humanity urges President Biden to comply with the resolution rejecting the blockade, issued on 29 occasions by the U.N. General Assembly, for being contrary to international law. We also call on Biden to immediately act on the electoral promises he made to revoke the measures taken by Trump to reinforce the blockade.

We wholeheartedly support the measures adopted by the Cuban government and its people to defend their independence, their sovereignty and their socialist project of emancipation. We especially support the Cuban people who are mobilized in the street and in social media in defense of their revolution.

It is in the same spirit that we support the call of President Miguel Díaz-Canel Bermúdez encouraging the most democratic of acts of taking the streets by the people, with the revolutionaries at the forefront, to put a stop to this latest threat of a soft coup.

Cuba will win against every imperialist counterrevolutionary attempt! There is no power in the world capable of subduing its heroic people!