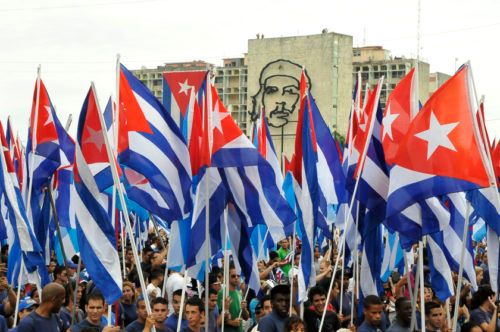 We heard it, for example, in front of the Capitol, seat of the National Assembly of People’s Power, and along Prado down to the waterfront Malecon. We heard it up to Belascoaín, and along Carlos III, where neighbors gathered, waving flags and, above all, ideas.

A woman shouted from her balcony, “Viva la Revolución!” and “Viva Cuba Libre!” Her voice joined those of many younger residents who, on the street below, waved the 26th of July Movement flag and repeated, louder and louder, clearer and clearer: “Fidel, Raúl and Díaz-Canel are here,” “Patria o Muerte, Venceremos” (Homeland or Death, We will win).

We heard it along Infanta, from women and men, Cubans with few and many years of age, all with the same conviction: a country like ours, with so many dreams and more than a few pains, is defended tooth and nail, knowing that, as the poet [Fayad Jamís] said, “For this freedom/ beautiful as life/ we must give our all/ if necessary/ even the shadow/ and it will never be enough.”

We heard it from Julio Alejandro Gómez, a blogger who joined the honest demands of those who love and create and took to the streets, “because I am a revolutionary, and I know that this is a manipulation. They want to take advantage of our needs and problems to apply the same formula of ‘social unrest’ that they have used in other countries, but with Cuba there are no formulas that work. The Revolution belongs to the people and is defended by the people.”

We heard Alberto Bermudez, who lives on Infanta, and in the midst of the racket, hummed “I die as I lived” with a group of buddies, and, soon thereafter, it was the notes of the national anthem they offered.

“Unity and continuity,” others shouted, while Alberto interrupted his song to affirm: “Fidel, this is your people, and the streets belong to the people. The order has been given, and we are here. We are going to win, in spite of COVID-19, in spite of whatever.”

The same phrases, shouted along the way, led our group of reporters to Alfredo Vázquez, provincial secretary of the Federation of Cuban Workers in Havana, who was injured in one of the confrontations with the “destabilizers.”

“They hit me hard on the head, and I ended up with a seven-stitch gash. But here I am, my flag stained with blood, ready to continue defending the Revolution, because to die for the Homeland is to live,” he insisted without slowing his pace, just like Cuba, the land of revolutionaries who are never intimidated.

And there beside Via Blanca, Faustino Leonard, a resident of Cerro municipality, also spoke to us about the day, while the remains of rocks thrown were still on the street.

“The quarrel was tough here, but there were more revolutionaries. The saboteurs ran away to hide, probably to some cave, like rats usually do. Let no one doubt it, this country belongs to the people and will continue to belong to us.”