In Haiti, around 1:00 a.m., July 7, brand new SUVs without license plates pulled up to the private residence of President Jovenel Moïse in Pétion-Ville. A team of assassins got out, slipped through his security and shot him dead. His spouse was severely injured. 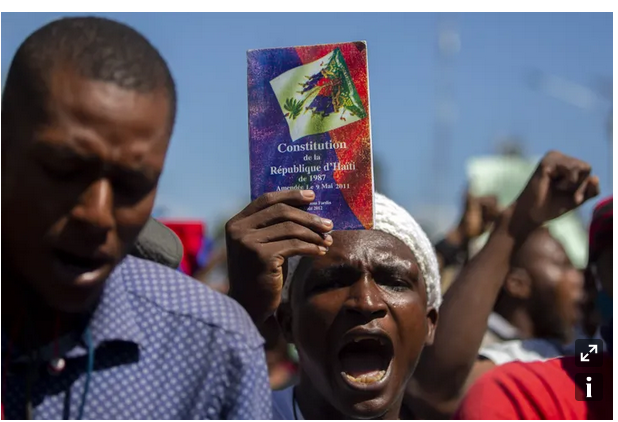 Since 2019 Haitian people have been taking to the streets by the millions in protests and general strikes against labor exploitation and U.S. interference in their government–here in La Croix in March.

President Joe Biden has expressed reluctance to openly intervene in the chaos that puppets and allies of the U.S. have created in Haiti. Nevertheless, U.S. imperialism’s responsibility for the deadly, contentious situation following the assassination of President Jovenel Moïse is clear.

The real details of the assassination — who did it, who paid for it, what were their motives — are murky. The Haitian National Police (PNH) have charged 20 Colombian citizens and two U.S. citizens of Haitian origin with participating in the attack.

No reports say whether any of Moïse’s security guards, who were drawn from elite units of the PNH, were injured in the attack. The PNH postponed interviewing their leading officials until some time during the week of July 11, at least four days after the attack. The PNH announced July 11 that some guards involved had been placed under house arrest.

Claude Joseph, whom Moïse appointed prime minister in April, now claims he gives orders to the 15,000 cops and the 500 army troops of the country. Dr. Ariel Henry was scheduled to replace Joseph on the day of the assassination. Because the president, Moïse, had been killed, Henry was unable to be sworn in.

Both Joseph and Henry claim to be acting president. The U.S. government and the United Nations, whose special representative in Haiti is Helen La Lime, have recognized Joseph as Haiti’s president. Before she was appointed to the U.N., La Lime was U.S. ambassador to Angola.

Why should the U.S. decide?

The question that patriotic Haitians have to ask is: Who gave the U.S. and the U.N. the authority to determine Haiti’s president? Whatever is decided, both Claude Joseph and Ariel Henry have strong connections to the United States.

When he was a student leader in Haiti, Joseph received substantial funding from the National Endowment for Democracy, which is a tool of U.S. intervention. Later, Joseph got his doctorate from the New School and taught in New York and Connecticut. One of the first steps Joseph took as acting president was to request U.S. soldiers be sent to Haiti.

Henry served as minister of interior and territorial communities and was politically active organizing around the second coup d’état against elected President Jean-Bertrand Aristide on Feb. 29, 2004. U.S.-based mercenaries carried out that coup, kidnapping and taking Aristide to the Central African Republic.

On paper, Haiti is a parliamentary democracy. Right now, it has no functioning parliament. Its government has been hollowed out, leaving 10 senators the only elected office holders for this country of 11 million people.

This hollowing was done deliberately by Moïse, with full and unequivocal U.S. backing, so he could run the country by decree. During the past year, hundreds of thousands of ordinary Haitians have been in the streets protesting Moïse’s attempt to use U.S. support to stay in power.

In a July 6 statement, Black Alliance for Peace put a price tag on this support: The U.S. “has spent at least $12.6 million since Moïse was elected in support of dubious elections and bogus political processes.”

Without a parliament to grant its approval, all the prime ministers whom Moïse appointed were unconstitutional. Much of what they did may be challenged legally.

All the other officials in Haiti — members of the National Assembly (the lower house of parliament), mayors, councillors, boards of all sorts — had their mandates expire by February of 2021 or earlier. President Moïse postponed the elections that would have renewed their mandates and instead appointed his choices to be mayors and local officials.

On July 9, eight of the ten serving Haitian senators met and elected yet another provisional president, the chair of the Senate, Joseph Lambert.

Black Alliance for Peace has pointed out that “[t]he Haitian people must be allowed to exercise self-determination and address their internal political situation without interference.”

Since what the U.S. and France have done has caused tremendous economic and financial hardship to Haiti, the ongoing Haitian demand for full and fair reparations is certainly justified.