Of the 39 countries on which the U.S. imposes deadly economic and financial sanctions, the longest and most onerous sanctions have been imposed on Cuba through a 60-year blockade. 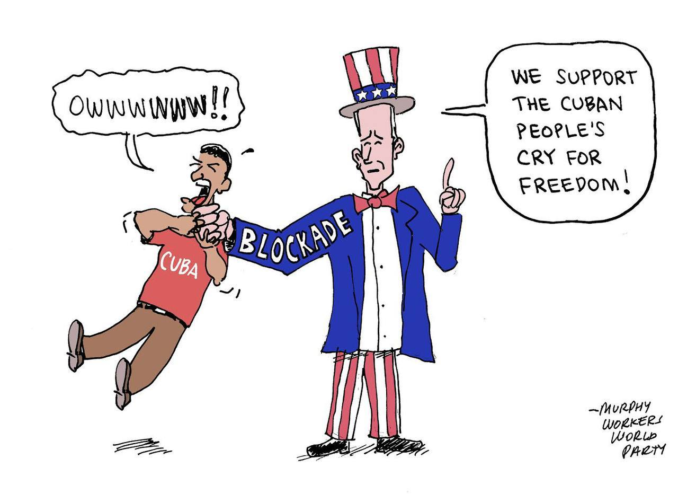 And while Cuba, in defiance of the blockade, has survived and even thrived by establishing a countrywide free health care and educational system, the blockade has caused severe shortages in food, fuel and medical supplies on the island.

In the face of these economic difficulties, Cuba has been an example of international solidarity by sending medical brigades to scores of countries in response to natural disasters and other health crises. The Henry Reeves Brigades have provided medical care and assistance to numerous countries during the current coronavirus pandemic.

At the same time Cuban scientists have developed several successful anti-COVID-19 vaccines. Cuba, Vietnam and Iran, in collaboration, plan to produce over 100 million doses of vaccines for their populations, as well as for other countries that have received very small amounts or none of the vaccines.

Nearly every country in the world has recognized Cuba’s contributions to the international community. This was confirmed June 23 by an overwhelming 184-2 vote in the United Nations General Assembly in support of a resolution to end the U.S. blockade. Only the U.S. and its creation, the settler state of Israel, voted against the resolution. 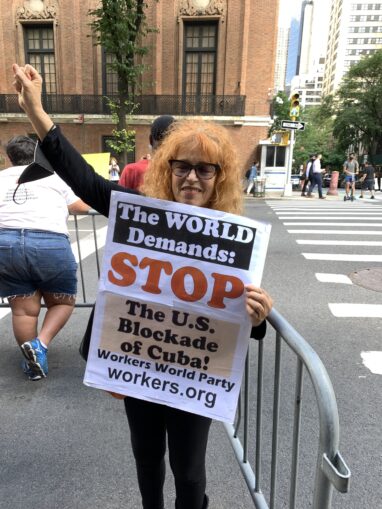 Workers World Party, through its organizing and its outreach literature, has supported all efforts to end the criminal blockade, from the beginning. On June 20, WWP members joined the monthly New York City car caravan and street rally in support of the Cuban people. The caravans, which began in Miami during the height of the pandemic when it was unsafe to gather in person, have become a monthly event throughout the world.

Cars — decorated with signs calling for the end to the blockade and for the U.S. to get its military prison out of Guantánamo Bay — drove around Harlem and other neighborhoods, receiving cheers from people in the community. The caravan culminated in a street rally, joined by activists without cars.

A large caravan will take place July 25 in Washington, D.C. The event is timed to greet and join Carlos Lazo, a Cuban American school teacher, and six other Cuban Americans who are walking 1,300 miles from Miami to Washington. There they will present the Biden Administration with a petition signed by over 25,000 people calling for an end to the U.S. blockade and demanding the end of all sanctions against revolutionary Cuba.

Despite Cuba’s success in producing five vaccines that have been proven effective against the virus, the inoculation of its population has been seriously affected by the blockade. While enough doses have been produced to vaccinate the entire population of Cuba, the blockade has prevented medical supplies crucial to that effort, such as syringes, from reaching Cuba.

In response, Workers World has joined with the Cuba Solidarity movement in a campaign to purchase and deliver 20 million syringes to Cuba. So far, over $450,000 has been raised, and the first shipment of 1.5 million syringes is due to arrive in Cuba July 12.

Contributions to the Syringes for Cuba Campaign can be made on Global Health Partners’s website: ghpartners.org.