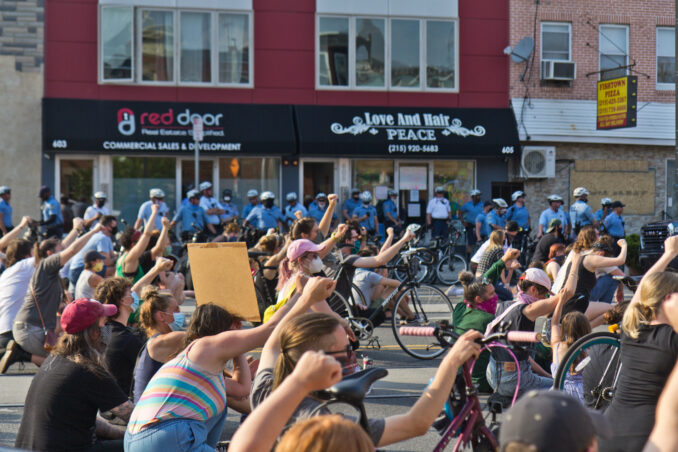 Fishtown residents raised fists in solidarity with country-wide protests against the death of George Floyd at the hands of police. (Kimberly Paynter/WHYY)

As protests over the police murder of George Floyd engulfed the U.S. in spring 2020, in Philadelphia two polar-opposite demonstrations took place.

On the afternoon of June 1, thousands of demonstrators protesting police brutality spilled onto the I-676 highway in Center City. Police responded to these peaceful protesters with a barrage of rubber bullets, tear gas and pepper spray directed at individuals’ faces, while they freely used their police batons. Several people were injured, and hundreds were arrested with many still facing charges.

Later that day, in Philadelphia’s Fishtown neighborhood, a group of white vigilantes, armed with baseball bats, walking clubs and tools, threatened, harassed and assaulted peaceful counterprotesters. They claimed to be “protecting their neighborhood” from nonexistent looters and rioters.

Over 36 residents called police to report the threats and attacks of this white mob. Yet police who showed up did nothing to intervene. When members of the vigilante group attacked and injured two people — a protester and a reporter — police stood by, watching the assaults, and made no arrests. Over 20 officers were in the area, with several seen chatting with the vigilantes.

Workers World spoke with Fishtown resident Scott Williams who described the white-supremacist vigilantes: “People in the neighborhood, especially people of color, were terrorized, and as a result many moved out. They saw white guys with baseball bats, roaming around the neighborhood looking to beat up people of color and people associated with the Black Lives Matter movement.

“But our neighborhood did respond,” Williams explained. “Over the next two nights, thousands of people marched through the neighborhood in massive, spontaneous, pro-BLM demonstrations. Local small business and property owners were [the people] who were defending the police. It wasn’t poor white racists; it was rich white guys including some gentrifiers, and they were exposed.”

With little fanfare, weeks after the assault, one of the vigilantes, George Graf, 36, was charged with conspiracy, aggravated assault and reckless endangerment for punching and kicking (PBS) WHYY producer Jon Ehrens who was videoing the scene. Graf was charged with felony criminal conspiracy to engage in aggravated assault. Graf had pleaded guilty to simple assault twice before; one case involved anti-Asian violence.

Why did it take weeks for Graf to be held to account for his violent attacks?

Williams and his girlfriend Kara Khan were biking home after being tear-gassed by police during the I-676 protest. As they neared the area where the white vigilantes were gathered, someone threw a water bottle at Williams’ head and yelled obscenities and racial slurs at him and Khan. Goodwin then shoved Williams off his bike and repeatedly punched him in the head until his ear and face bled.

Finally, on July 7, 2021, Goodwin — brother of a 26th District Philadelphia police officer — was arrested for the attack on Williams and charged with assault and recklessly endangering another person.

There are many unanswered questions about this incident. Goodwin has a history of violence. He has previously served prison time for fatally punching a man during a bar brawl in 2008 but was out on probation by 2012.

Why did it take over a year for Goodwin to be charged for beating Williams and only after he turned himself in?

Why was Goodwin out on probation in less than four years on a murder conviction — when some Pennsylvania incarcerated people are serving decades in prison on such less serious charges? Demetrius Grant, a Black man incarcerated in SCI Albion, and a regular contributor to Workers World’s Tear Down the Walls pages, is serving his 28th year for assault.

Many Black Lives Matter protesters were arrested during the demonstrations in 2020. Several, including BLM activist Anthony Smith, have since been charged with federal felonies that carry heavy possible sentences for allegedly setting police cars on fire. If convicted, the mandatory minimum sentence for this property damage is seven years.

But again this year, late on the evening of July 3, Philadelphia police stood by, doing nothing to intervene, when a group of 200 white-supremacist men, marching through Center City, attacked and brutalized people who challenged their right to threaten and endanger the people of this city.