Forty years ago, on June 5, 1981, the first instance of what came to be known as HIV/AIDS was reported in a weekly news release from the Centers for Disease Control and Prevention. 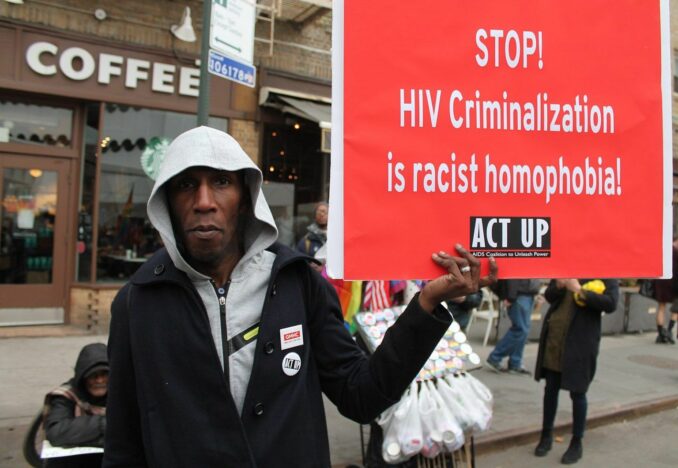 On July 3, 1981, the first mainstream news acknowledgement of HIV/AIDS was made by the New York Times, which reported in this headline: “Rare Cancer Seen in 41 Homosexuals.” By the time of that publication, at least 8 of the 41 people had already died. These cases had been reported in California and New York. (nyti.ms/3vZTInK)

By the end of 1981, 121 people had died from this previously unknown disease. Over the next 14 years, the sickness would kill hundreds of thousands world-wide, affecting largely Black and Brown, disabled and LGBTQ+  people and those at the intersection of these identities. Initially dubbed GRID (Gay-Related Immune Deficiency) in June 1982 – due to the erroneous belief that it only affected gay men – the disease was re-named Acquired Immune Deficiency Syndrome (AIDS) in September 1982.

In 1984, it was announced that a retrovirus known as HTLV-III (Human T-Lymphotropic Virus III) was the virus that caused AIDS, and was identical to Lymphadenopathy-Associated Virus, earlier thought to be the sole infection causing AIDS. In 1985, HTLV-III/LAV was officially renamed Human Immunodeficiency Virus (HIV). HIV is the infection which, if left untreated, leads to the late-stage disease of AIDS.

The number is undoubtedly higher. Millions of working-class people did not have access to testing or healthcare, suffered in secrecy or died before the official statistics were counted – as HIV/AIDS has now been revealed to have existed prior to 1981.

Who is to blame? The usual culprits: capitalists, greedy pharmaceuticals, healthcare CEOs and corporations in the economic sphere. In the social sphere, the villains continue to be homophobia, misogyny and transmisogyny, racism, ableism and other social oppressions that intensify what can only be described as a plague.

In order to properly understand the calamity of the AIDS crisis, we must thoroughly examine the conditions that led to such a disaster. How, in 14 years, did a disease kill more than a quarter of a million people, most of whom were nationally oppressed and/or socially oppressed? How was it that the “most advanced, most developed country” in the world, the U.S., proved utterly useless in the first several years of this plague, and later was hardly more helpful? This series seeks to answer these questions and explain those answers.

Socialist countries like China, Cuba, Vietnam and the Democratic Peoples Republic of  Korea have mobilized health care systems based on socialist principles in order to decrease the number of cases and, more importantly, the number of deaths, and have succeeded in containing the virus. But the capitalist structure of the U.S., dedicated to profits and privatization of healthcare, has devastated the wellbeing of people and allowed hundreds of thousands to die.

Many are now looking at COVID-19’s parallel with the early years of the AIDS epidemic, and the U.S. government’s similar non-response to the suffering of working-class and oppressed persons. The connections are glaringly obvious, boiling down to this: Capitalism-imperialism is a decaying, rotten system inadequate to even keep its workers alive to power the system.

Fully aware of the cracks in this structure, its proponents continue to shovel billions into divide-and-conquer tactics, conspiracy theories and any ploys that can enlarge divisions between working-class and oppressed persons and block solidarity and mass organizing to end the system.

More and more people are becoming aware that we must organize together to deal a death blow to capitalism. Through this, and only through this, can we establish a dictatorship of the proletariat and build a socialist system.

Only then will epidemics like AIDS and COVID become manageable and, eventually, treatable.