Gary Jones, former International President of the United Auto Workers, was sentenced to 28 months imprisonment June 10 for his role in an embezzlement scheme that cost rank-and-file members millions of dollars in dues money. Jones and his cohorts — including his predecessor ex-President Dennis Williams, also sentenced — treated themselves to cash, lavish accommodations, expensive food and booze and golf outings, clubs and paraphernalia. Other top officials and staff took kickbacks from vendors and even bribes from Fiat Chrysler Automobiles (FCA, now Stellantis) in exchange for agreeing to substandard contracts. 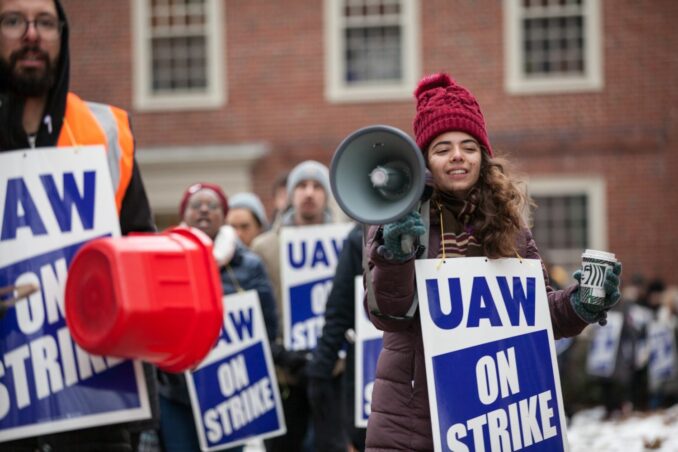 These corruption scandals, uncovered by a federal investigation, have shamed the union leadership in the eyes of its membership and the broader labor movement. The repugnant behavior by members of the union’s International Executive Board hurt organizing drives at Volkswagen and Nissan plants in the South.

Neither the U.S. federal attorneys nor the UAW International Executive Board — not to mention the companies the union negotiates with — want a revival of militant, democratic, rank-and-file driven unionism. The Jan. 29 decree between the UAW and the federal government allowed the court-appointed federal monitor, who will oversee the UAW for six years, to be recommended by the UAW. Members have compared this to the fox guarding the chicken coop.

A 1989 federal racketeering lawsuit led to a consent decree with the Teamsters union, including a provision for the rank and file to elect their international officers directly by secret ballot. But UAW members have not been given that right. Instead, they will have to vote on whether to go to a “one member, one vote” system — or continue with the system in place now, where delegates at the UAW Constitutional Convention elect the IEB.

The Administration Caucus, which has run the UAW for over 70 unbroken years, uses the convention system to ensure their handpicked candidates are elected and reelected to the IEB year after year. This keeps class collaborationist and corrupt leaders in power, at the expense of the membership.

The Administration Caucus, also known as the Reuther Caucus, was founded by then-UAW President Walter Reuther during the anti-communist witch hunt of the late 1940s to early 1950s. Reuther was a social democrat who used his position to purge members of the Communist Party USA and the Socialist Workers Party from leadership. To eliminate leftist rivals, he took advantage of a clause in the union-busting Taft-Hartley Act, requiring union officials to sign an oath swearing they were not members of the CPUSA.

That clause was later ruled unconstitutional by federal courts, but Reuther was able to achieve total political control of the UAW IEB. This was when the Detroit Three auto companies and the union reached an agreement — designed to ensure class peace — known as the “Treaty of Detroit.” Autoworkers received many gains, such as an annual “improvement factor” raise, the cost-of-living allowance (COLA), pensions and supplemental unemployment benefits (SUB pay) to augment government unemployment compensation while laid off.

But Reuther agreed to stop pushing for a shorter work week at the same weekly pay, which would keep autoworkers employed even as technological improvements reduced the hours needed to produce a vehicle.

Compared to today’s UAW leaders, Reuther was a militant, a progressive and a “clean” leader, who was not known to take bribes or embezzle members’ dues money. Even his brother Victor Reuther rebelled against the concessions the Administration Caucus agreed to in the 1980s and supported the reform-oriented New Directions Movement. But the 70-year-old, one-caucus rule begun under Reuther continues to disempower the rank and file.

One member, one vote: an opportunity to organize

Prior to his June 30 resignation, UAW President Rory Gamble stated that the IEB would “educate” the membership on the benefits of staying with the convention election system. How the rank and file would benefit from a lack of union democracy has not been elucidated.

Since the resignation from the union by the disgraced President Jones, the IEB has instituted some measures to keep corrupt practices in check. But if the Board was really serious about mending this broken union, there would be unanimous support for direct elections. Moreover, the IEB would dissolve the irreparably dysfunctional Administration Caucus altogether.

Instead it is up to the rank and file to turn the UAW around. A grassroots union caucus, Unite All Workers for Democracy, emerged in response to the corruption scandals. Now UAWD has launched a massive organizing campaign to convince the 400,000 UAW members and 560,000 retirees to be sure to cast a ballot in the referendum for one member, one vote.

While UAWD’s energy is currently focused on winning the referendum, the date of which has not yet been set, the caucus has a broad progressive program. Planks include strengthening the strike fund, an end to tiered wages and “temporary” worker classifications, global solidarity, no plant closings, a shorter work week with no cut in pay, and opposition to “racism, sexism and all forms of bigotry.” (uawd.org)

In organizing for direct elections, union militants can be holding conversations on all these issues, along with the need to abandon business unionism and return to the anti-capitalist orientation of the union’s left-wing founders.

This will impact the whole labor movement for the better.

Martha Grevatt retired after working 31 years for FCA and served on the Executive Boards of UAW Locals 122 and 869.